Older workers are key to manufacturing’s recovery, but will they be retrained and rehired? 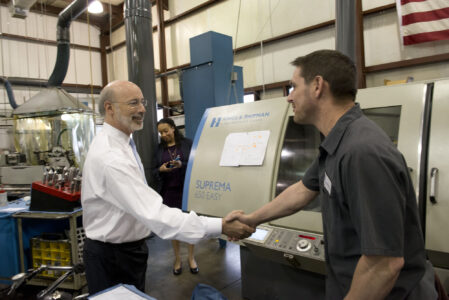 Stephen Ory’s career in manufacturing stretches back three decades, in shipyards, electricity utility, and nuclear. But when the nuclear power station he transferred to in Massachusetts closed down in 2019, Ory, then in his early fifties and out of a job, decided to expand his toolkit by enrolling in an advanced manufacturing program at a local community college.

“I’m basically starting over,” Ory, now 55, said. “I’m just gambling that I can combine my new skills in advanced manufacturing with the old skills of my background.”

American manufacturing firms rebounding after the pandemic face an additional challenge to supply chain woes: older, experienced workers left the workforce in droves during the worst of the virus, and many have not returned, hamstringing production. Job retraining programs at community colleges like the one Ory attended can provide a solution to getting these key older workers back to work—but only if manufacturing firms rehire and retain workers, and those workers want to come back.

“When we’re talking about an aging workforce, I think it’s all part of a bigger umbrella of how do you keep the workers that you have?” said Chad Moutray, chief economist at the National Association of Manufacturers and the director of the Center for Manufacturing Research at the Manufacturing Institute. “How do you continue to build a culture and differentiate what we’re doing in manufacturing with other careers so that we keep that pipeline open, but also keep those workers sticky so they don’t leave?”

Of the five million people who have exited the labor force since the onset of the pandemic, nearly 70% are older than 55. The loss of those workers has exacerbated an already dire labor shortage that may see some 2.1 million manufacturing jobs go unfilled by 2030. In this climate, manufacturing firms are desperate for workers they can keep for the long-term. A 2022 study saw 83% of surveyed manufacturers name attracting and retaining workers as a top priority; nearly half (45%) reported they had turned down business due to worker shortages.

Bringing decades of work experience and strong institutional knowledge to the table, older workers are key to manufacturing’s full recovery. Research shows that age-diverse workforces are more productive, as less-experienced workers pick up strategies from their skilled counterparts.

“We know that the 50-plus worker would be a particularly well-qualified worker for manufacturing because they have experience,” said Kathy Rentsch, the associate vice president for strategic academic and workforce initiatives at ​​Quinsigamond Community College (QCC) in Worcester, Mass., the college Ory attended. “They have already demonstrated their ability to show up and be productive members of a workforce.”

Hear Stephen Ory describe in his own words the long hours he put into his schoolwork at QCC.

Research shows that manufacturing firms have more to gain from older workers than mere labor. A 2008 study conducted in Germany found age diversity in the workforce helped boost overall productivity in 18,000 surveyed firms.

“There are particular technologies that only older workers know and younger workers don’t know, so when somebody retires with this kind of knowledge it’s a real difficulty for your firm,” said Robert J. Willis, a professor emeritus of economics at the University of Michigan.

But despite the benefits these workers bring, many companies aren’t focusing on that demographic. Some 86% of surveyed companies had not developed strategies to recruit and retrain older employees, according to a November 2021 study by the Manufacturing Institute. Only 18% of surveyed companies believed having a diverse age range of workers is important. 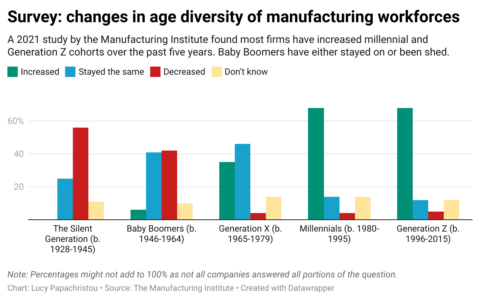 Atlas Machine and Supply, Inc., a Louisville, Ky.-based company that repairs equipment for power plants and auto manufacturers, lost about five percent of its roughly 220 workers to early retirement. They boosted wages by 10% to keep the workers they still have, but they aren’t looking to hire those older workers back.

“We sort of assumed they wouldn’t want to come back because they already have a new lifestyle” in retirement, said Richard Gimmel III, the company’s president. Atlas had some twenty open jobs at the end of April, Gimmel said, adding that “we are certainly limited by our ability to hire people at the moment.” 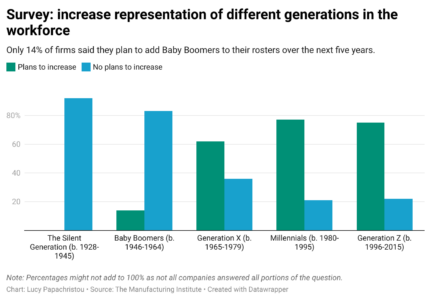 Phyllis Hartman, an HR consultant in Pittsburgh, Pa., said she often tells manufacturing firms struggling to fill positions “Hey, look at older workers, because there may be highly qualified individuals out there who can do the job.”

But she said many of her clients aren’t following this advice. One plant she advises saw 90% of its older workers quit at the beginning of Covid, and were only able to bring “a couple” of those workers back. The company has since “kind of quit reaching out” to the other employees who had left, she said, and is instead focusing on rebranding itself.

“They’re trying to help people understand that manufacturing is a good place to be,” Hartman said. The company is also pursuing a “lights out” policy, leaving the production machines running overnight because there are too few workers to meet quotas.

Community colleges like Quinsigamond Community College in Massachusetts have decided to target the issue by reskilling older workers. But Ory is just one of a handful of older students the college has enrolled over the past couple years. A collaboration with AARP brought in a few initial inquiries to admissions, but Rentsch, the administrator, said the school “didn’t see the surge we were hoping for.”

Rentsch believes the thorn in the side of the school’s recruitment efforts is the overall strength of today’s economy.

“What’s the value of going back to school in an environment where jobs are plentiful?” Rentsch said. A job at an Amazon warehouse with a solid starting salary might be more attractive than enrolling in a semester-long precalculus course, she noted.

But Stephen Ory has never been tempted by a job outside manufacturing. Unfamiliar with the newest technologies, he thought heading back to school was the only way to relaunch his career after he was laid off.

Shortly after graduating, Ory walked into the doors of a small medical manufacturing company in Plymouth, Mass. with his resume in hand and was hired that same day. He now works with a robot to make part of a stainless steel component to repair ACLs, a technology he said he wasn’t familiar with prior to attending QCC.

“My boss liked the idea that I had a degree in manufacturing, even though I did have a lot of experience,” Ory said. “I want to use the plethora of my background and try to put it all together in some kind of way.”