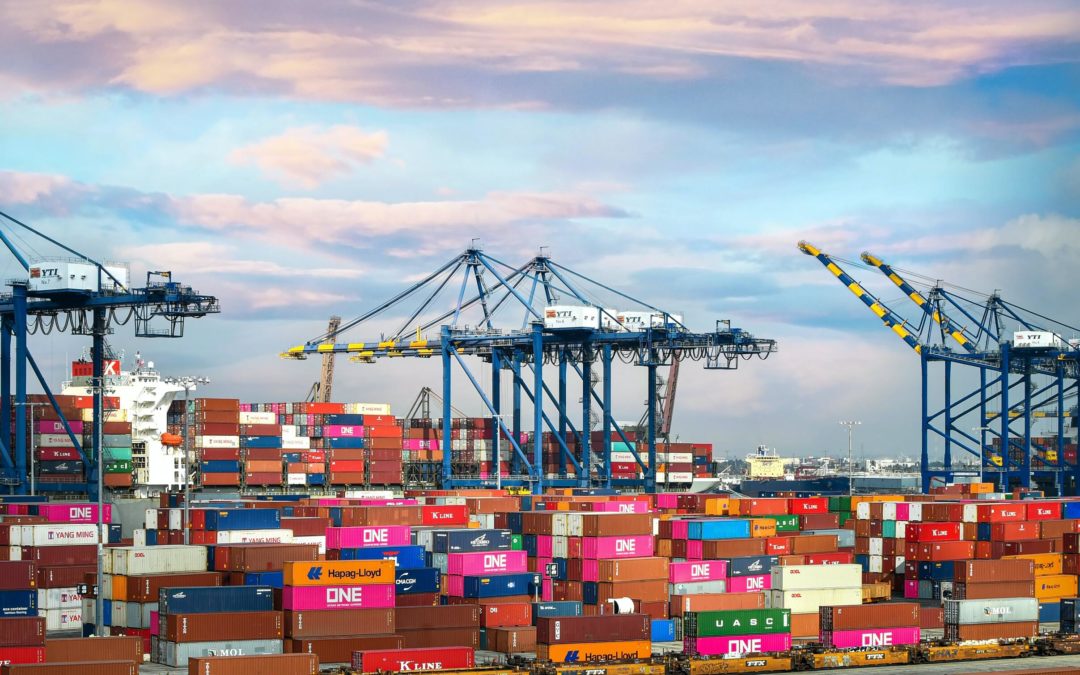 The US trade deficit remained at a near-record level in February, reinforcing the view that American consumers are faring better than their overseas counterparts despite continued bottlenecks at port cities throughout the country.

The monthly trade deficit came in at $89.2 billion, about one-tenth of a percent below January’s number, the Commerce Department said Tuesday. Imports and exports both rose by about $4 billion from the previous month. The current trade deficit, which measures US exports minus imports, is the largest in US history.

US businesses imported more capital goods than ever, a sign of continued investment. The report also showed record imports of consumer goods, suggesting that businesses expect Americans to continue buying products at high levels despite rising prices. The country also imported a record value of petroleum products, which includes oil and gas, though the record was due almost entirely to increased oil prices.

The trade deficit has grown during the Covid-19 pandemic, as Americans have purchased more goods than ever, many of which are manufactured overseas. February’s report suggests that the growing deficit may have reached its peak, though economists disagree on whether the global economy will head back to pre-Covid standards. Meanwhile, a wave of Covid in China has caused shutdowns at some of the world’s largest ports, and war in Europe has dampened demand for American exports.

The February report is the first to include data gathered during the Russian invasion of Ukraine, though the full impact is yet to be seen. The Russian economy has much closer ties to Europe than the United States, and the Russian invasion was one more blow to a European economy that hasn’t recovered as fast as the US. That has hurt American exports to the region.

“It’s a bit tougher for us to export in this environment,” said Peter Morici, an economist and Professor Emeritus at the University of Maryland. “Given the pandemic situation and the war, that creates a problem. Our export markets are limited there.” 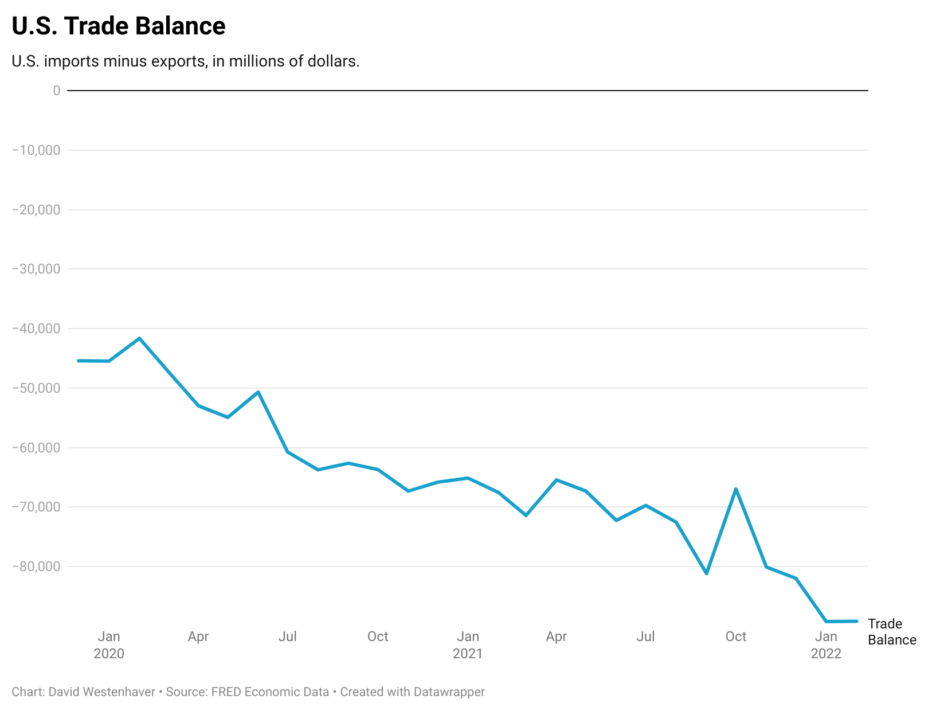 The economic effect of the war in Ukraine is most likely to be felt through trade for oil and gas.

Rising gas prices have been at the forefront of many Americans’ minds, and that inflation is likely to impact the trade balance moving forward, but not as much as casual observers may think. The US is a net importer of petroleum products, but only by a small amount, as the US also exports large amounts of petroleum.

China’s latest Covid wave is also having an impact on global trade, especially US imports, as several major Chinese ports have shut down. The worst of the wave came after the most recent report, but a February outbreak in Hong Kong showed how this wave could impact trade between China and the US. China’s strict Zero Covid policy means that cities and their ports shut down entirely when there’s an increased chance of an outbreak.

Now, the ports at Shanghai and Shenzhen are closed for Covid containment, leading to more backups of imports from two of China’s busiest ports. As America’s largest import partner, backups at Chinese ports are likely to create delays for goods and hurt businesses that haven’t been able to build up inventory, a problem that has persisted for much of the pandemic.

“The lingering effects of the Omicron wave in China is clearly disrupting trade flows,” said Chris Low, chief economist at FHN Financial. “We were making progress on some of the shortages, but that’s going to be tough to keep up with the situation in China.”

Jasmine Basha is the owner of Villa Imports, a direct import company that sells ceramic pots made in Spain to large retailers in the US. Like many American business owners, Basha wasn’t sure how Covid would impact her business in early 2020. But, by the summer of that year, her orders were higher than they’ve ever been, and they haven’t gone down.

“It’s been at that same level now for two years,” Basha said. “We haven’t been able to breathe.”

Basha has been dealing with increased shipping prices for most of the last year, but, over the past few months, delays have become a bigger problem.

“There isn’t a ship on time, there isn’t a container on time, and the product isn’t making it on the shelf in the US on time,” she said. “It’s a complete logistic nightmare.”

Many economists are asking if this report marks the end of the US’ growing trade deficit. Demand for goods has been irregularly high for two years, with many of those goods imported from overseas. Meanwhile, the US is the world’s largest service economy. Many of those services sell to Americans, but, in pre-Covid times, the US exports huge portions of services, which keeps the trade deficit smaller.
Some economists are forecasting a return to pre-pandemic spending habits, which would shrink the trade deficit. If that shift happens, it will allow importers like Basha to restock inventories and catch up with their orders.

Yet, others believe these new spending preferences, and the record trade balance, are mostly here to stay. If they are, then this month’s report could be an example of the country settling into the new normal.

“Goods purchases have topped up for now, but it’s not going to go back down by a lot,” Morici said. “People have changed their habits.”