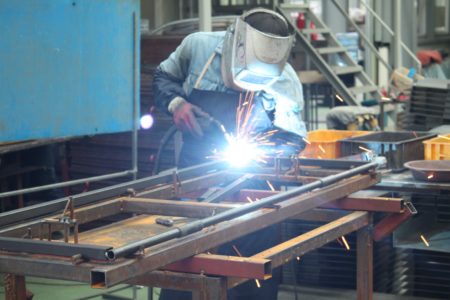 A welder at work. Source: Rawpixel

U.S. manufacturing saw further gains last month, but its growth was slowed by prices increasing against the backdrop of global energy market instability.

March’s manufacturing index from the Institute for Supply Management registered at 57.1%, a decrease of 1.5 percentage points from the seasonally-adjusted reading in February, when the lingering effects of the Omicron variant were still felt in worker absences. While a figure over 50% represents growth, March’s reading is the lowest since September 2020’s of 55.4%. 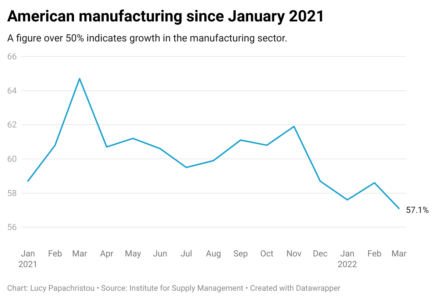 The report, which was released Friday, is an indication that the economy, which has thus far surpassed all predictions for recovery, may now be slowing down. Even while the Fed is taking action to curb inflation with as many as seven interest rate hikes expected this year, economists said that surging energy prices caused by the war in Ukraine may cause headaches for manufacturers, who are already struggling to hire back workers.

“It was a disappointing report that could signal further slowing ahead,” said David Sloan, senior economist at Continuum Economics. “The slowing may be related to a sharper rise in energy prices. I’m not sure how long the weariness will persist.”

Of the 18 industries included in the report, 15 reported growth—although most of that growth had significantly slowed from February. Nevertheless, March marked the 22nd consecutive month of growth since the pandemic ravaged manufacturing. The data was collected in the middle of March, after most states had dropped their mask mandates and public school schedules had largely normalized, providing relief to many working parents. The nonprofit Institute for Supply Management compiles the index based on a survey of purchasing managers at more than 300 manufacturing firms.

Economists were specifically concerned about new orders and production, traditionally seen as the leading indices, which were down 7.9 and 4 percentage points, respectively, from February.

“The details of the report were disappointing, in particular the slowing in new orders,” Sloan said. “I think supply chain issues will remain a problem, even if the situation in Ukraine improves. There’s also concerns on the Chinese side because they’re trying to pursue a zero-Covid policy,” which is shutting down factories across the country that normally supply essential parts to American manufacturers.

Economists are watching to see if the sharp spike in energy prices will persist, as there is a risk that inflated prices could feed into further wage growth and cause a wage-price spiral.

“The shiny object of the supply shocks has been diversionary for many people,” Lawrence Summers, the former Secretary of the Treasury for the Clinton Administration, said in a talk at the Economic Club of New York in late March. “If they kept their eye on what’s going on with wage behavior they’d have a clearer sense of the gravity of our situation.”

Economists said even more manufacturing workers need to rejoin the workforce before industries could fully recover; some may be drawn back by higher wages. March’s jobs report, which was also released Friday, saw 431,000 news jobs added and unemployment fall to 3.6%, close to pre-pandemic levels. But economists noted that most of these job gains were in leisure and hospitality; manufacturing added 38,000 jobs—a good showing, but demand for workers remains extremely high.

“People who fill clerical jobs or jobs that don’t require education is where we’re seeing the biggest shortfall, the greatest differential pre- and post-Covid,” said Stephen Gallagher, US chief economist at Societe Generale.

Gina Kittle knows these hiring and supply chain problems all too well. Her company, C.W. Marsh, has been manufacturing leather products for hydraulic and pneumatic systems, like wells and home garages, out of Muskegon, Mich. for 122 years. Although Michigan started ditching masks state-wide in mid-February, Kittle still can’t find the workers she needs to get profits back to what they were pre-pandemic.

“People have been getting away with murder lately because we can’t get new employees,” Kittle, the company’s CFO, said. Many of her 15 employees at the factory are now consistently showing up late for their shifts—or not at all. “Three years ago they’d have been fired a long time ago. But we can’t find anyone new to replace them.”

To top it off, the family-owned company is struggling to source its essential cowhide. “We’ve never had a supply chain issue before—we could just get cowhide whenever we needed it,” Kittle said. Some chemical products aren’t coming in on time, either, and Kittle is having to stockpile certain items ahead of announced price increases.