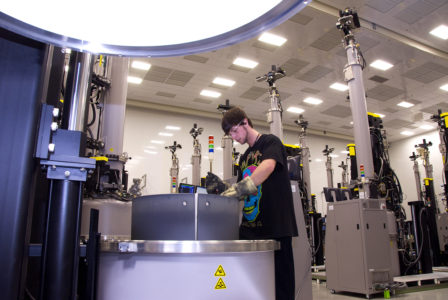 Solar wafer manufacturing at a plant in Oregon, 2009. Source: Flickr.

As energy prices soar across the United States and homeowners seek ways to lower their electricity bills, Patrick Regan’s small solar startup in South Bend, Ind. should be cashing in. Although the pandemic is loosening its grip and the broader economy has resurged with a vengeance, Crossroads Solar is still encountering problems all along its supply chain – from sourcing the panel components to high shipping costs – that are threatening to derail the business.

“I am nowhere near secure in the long-term viability of Crossroads Solar,” Regan, a former political science professor, said. “Right now it’s projecting or hoping or wishing or, if you’re a prayer, it’s praying.”

The thorn in Regan’s side is the rising cost of solar inputs. High oil and natural gas prices are hitting customers hard and a pending ban on Russian oil threatens to further unsettle the energy market. It may seem like a good time for renewables such as solar. But that industry is getting hit by some of the same problems as traditional energy sources.

Skyrocketing prices for silicon, the basic building block of most solar panels, have betrayed the downsides of an industry dependent on cheap Chinese products at the mercy of global supply chain snarls that continue even as the pandemic recedes in the U.S. Stubbornly-high input costs have already hurt large-scale solar manufacturers. Now they stand to damage smaller solar companies like Crossroads Solar hoping to gain a foothold in the burgeoning green energy sector.

While the high silicon prices are certainly hurting businesses in the short term, they are unlikely to derail the longer-run growth of solar. The industry has seen consistent expansion over recent decades, and some 46% of all new electric capacity added to the U.S. grid in 2021 came from solar, compared with 10% from natural gas. Solar is expected to earn $163 billion by the end of 2022.

“It used to be the story about the competition between coal and natural gas, but it’s really starting to trend more towards the increase and the use of renewables, specifically wind and solar,” said Tyler Hodge, a senior economist at the U.S. Energy Information Administration. 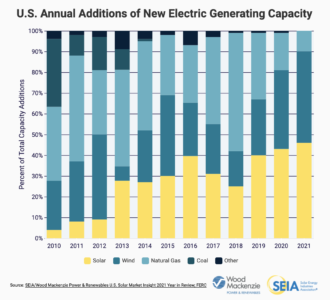 For manufacturers seeking to turn steady profits each quarter, the high silicon prices of the day are top of mind. Over 90% of the world’s solar panels are silicon-based, and 80% of the U.S.’ silicon cells are sourced from China.

The undisputed king of solar, China squeezed out most of its competitors and was able to keep prices for customers low for years. Silicon prices used to be almost negligible in production costs.

“No one really cared about the price of silicon,” said Gabriella Tranell, an engineering professor at the Norwegian University of Science and Technology in Trondheim and an expert on solar cell materials.

But more recently, decisions made in Chinese factories combined with global shipping woes related to Covid are the drivers of the price surges. China cut production at some of its polysilicon plants towards the end of last year in an attempt to reduce its energy consumption. That, combined with component shortages and record-high global shipping prices, drove the price of the polysilicon wafers used in American solar manufacturing up 300% from August to September 2021.

Silicon wafer prices are not showing signs of coming down in the short run. Several Chinese manufacturers hiked prices further in early March, bringing costs to four-month highs. Three of China’s top solar firms recently revealed a $1.8 billion investment plan to build additional factories and ramp up production, but the forecasted efficiency gains are a mere 2% above current levels. 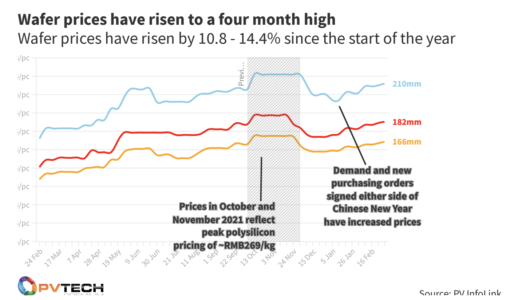 Silicon may be the second-most abundant element in the Earth’s crust, but production constraints are leaving the global demand unfulfilled. The high silicon prices are hurting commercial, residential and even the normally-robust utility-scale solar market in the U.S., which saw 18% price increases from over the past year. Some 13% of expected projects this year are delayed or have been cancelled outright. 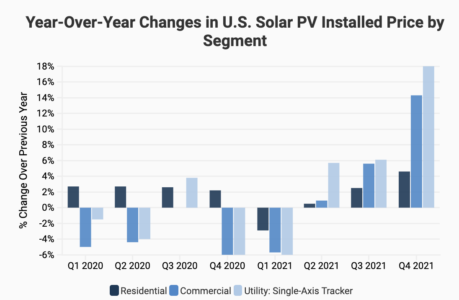 Like all industries, solar was dealt a blow in the pandemic, as workers got sick and shipments were delayed. Unused ships were scrapped, and when the economy rebounded, there were fewer ships available to move products like solar cells to assembly plants in the U.S. At the same time, demand was exploding worldwide.

“There was a tremendous push in 2021 for greening, both in the United States and Europe and also in Asia,” said Warren Wilczewski, an energy industry economist at the U.S. Energy Information Administration. “So you have everybody running to the same commodities, like lithium, cobalt and nickel. Inflation in those prices has outpaced inflation in pretty much every other commodity.”

China and the U.S. have long had deep ties in their oil markets. China’s frequent and harsh Covid lockdowns have caused its demand for U.S. oil imports to fluctuate and created uncertainty in the market. Solar is billed as a boon for the U.S. economy, but it too is extremely dependent on China.

“The question for the U.S. is do you want to own that [energy supply] or do you want to be dependent on another country for that?” said Michael Heben, a physicist and solar expert at the University of Toledo.

Some American manufacturers aren’t betting on China at all. Toledo Solar in Perrysburg, Ohio builds solar panels with cadmium telluride semiconductors, which make up about 5% of the solar market. The company sources all its components from within 300 miles of the factory, and was easily able to absorb small price increases in panel components.

“We’ve started to see a lot of folks in the private markets stop asking us why the hell we acquired a U.S. solar manufacturing company and say more along the lines of, ‘Wow, that seems like a good bet,’” said Aaron Bates, Toledo Solar’s founder. The company has doubled its employee count over the last 10 months.

But smaller silicon-based companies like Crossroads Solar aren’t able to build up alternative supply chains fast enough to avoid silicon price hikes. Regan started the company in 2019 to provide good jobs to formerly-incarcerated workers; most of his 14 employees recently left prison, and he feels extra incentive to keep the business profitable.

While Crossroads Solar was luckily able to weather the worst of Covid-induced supply chain problems, the prices for the solar cells Regan buys have gone up 25-30% since he opened up shop. Fearing they will rise higher, Regan has been buying solar cells in bulk, renting an additional storage unit to store the quarter million solar cells he purchased a few months ago. Silicon prices account for about 60% of the total sale price of his solar panels.

His bulk buying may have spared Regan the worst of the price jumps, but he is still forced to charge roughly 12% more for his panels now than he did before the hikes began. Simple cash flow is Regan’s biggest problem now that he’s renting the larger storage space, but “at least we’re not subject to the weekly vagaries of shipping,” he said.

“That’s just the cost to stay in the business,” Regan said. “I have to make this work.”