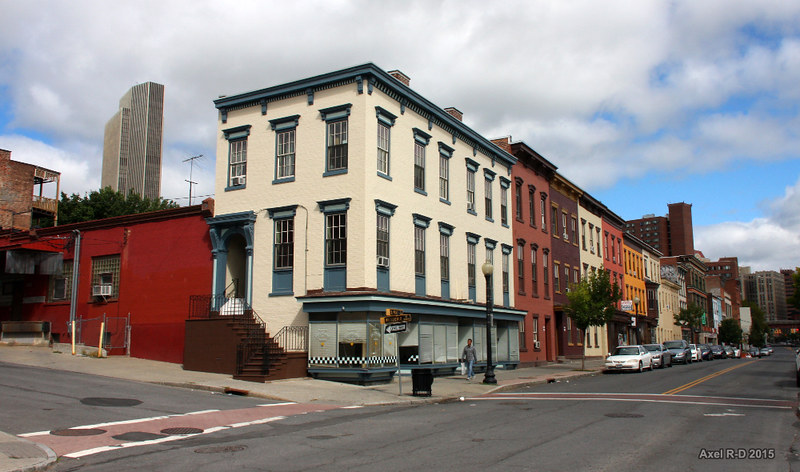 An Albany realtor and recruitment professional, Elisha Cleary was tired of the headaches of renting—cramped space, uncertain rental prices and crazy neighbors. But she was a single parent, with one income. And as an immigrant and daughter of a single mother, she didn’t have family wealth to help with a first time home purchase.

Plus, the pandemic complicated an already difficult home buying landscape. Demand was soaring, inventory was low and the price point to enter the housing market kept increasing, forcing Cleary to find even more money for a downpayment. In 2020 she began saving her stimulus checks to put toward a downpayment.

Cleary’s story showcases the hurdles facing Black homebuyers in a red hot pandemic market.  The legacy of discrimination, a housing crunch and limited down payment assistance programs have dampened Black homeownership rates, which have fallen by 4 percentage points since the start of the pandemic. 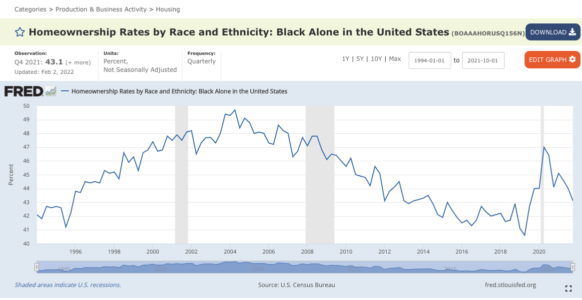 The consequence of those discriminatory housing policies is felt decades later. Fewer Black families own homes and have access to the economic benefits of homeownership. In turn, with home prices appreciating at faster than ever before, Black families are disproportionately locked out of those gains.

“We’ve seen existing homeowners grow their home equity by $3.2 trillion, we know that growth hasn’t been shared equally,” said Nikitra Bailey, senior vice president of public policy at the National Fair Housing Alliance.  “What we have seen during this time is that covid policies have really exacerbated existing inequities in homeownership and wealth.”

The pandemic reshaped housing in America, as urban dwellers left high-cost metro areas in search of bigger homes in cheaper communities like Albany. Demand for housing surged. Home prices increased at record rates, jumping 18.8% in 2021, according to the Case-Shiller Housing Index.

All of this has helped existing homeowners accrue wealth at a fast clip: The average homeowner made more from their home than their jobs in 2021, according to Zillow.  But the high appreciation makes it more difficult for first time homebuyers to get into the market.

Albany is no stranger to the pandemic dynamics as downstaters flocked north for bigger and cheaper lodgings. New residents were attracted to its mix of higher education institutions, post-industrial neighborhoods and access to government jobs. Home prices jumped 14.6% in  2021 and inventory sank to record lows. This all made first time homeownership more difficult to obtain.

“We have limited inventory already, the fact that we have so many more people relocating to the Capital Region makes it even more challenging for current residents looking to buy,” said Jamila Belton, a realtor who also serves as the vice president of the UpState New York Black Chamber of Commerce.  “That’s the one thing I’ve noticed is that people from New York City are moving here to the capital region.”  She emphasizes the challenges of first time homeownership extend to all first time buyers, not just Black families.

Belton says high demand for homes remains strong and houses purchased five years ago for $400,000 can sell today for $600,000. A recent house she toured was shown 35 times and had 17 offers. “The first time homebuyer has that disadvantage…the person who is able to make a higher offer is going to get it and take it right from underneath them,” said Belton.

“It was a very conservative and inward looking machine and didn’t want federal money because of the fair housing strings,” said David Hochfelder, associate professor of history at SUNY-Albany.

“The labor unions here were very racist and would not hire African-Americans except as laborers,” said Hochfelder.  “It was much harder for African-American tradesmen to get a skilled trades position.”

Albany’s history and legacy of housing discrimination reflects a larger problem in American history. Homeownership has been the traditional way for middle class families to build wealth in post-war America. A home is usually a family’s single greatest investment and asset.  But Black Americans have been systematically carved out of homeownership.

Until the late 1940’s racially restrictive deeds blocked African Americans from moving into high opportunity neighborhoods. After World War II, Blacks were denied the same low interest government backed mortgages given to White families. Mortgages that were used to purchase homes in the suburbs. Today, many White families have accrued a generations worth of home equity, all from government aid denied to African Americans.

After saving her stimulus checks, Cleary still did not have enough money for a downpayment. But she was able to access down payment assistance through a local foundation that supports first time Black homebuyers. With the help of the  $10,000 grant, she closed on a three bedroom home in September of 2021.

“I didn’t have anybody, didn’t have a relative that could give me money,” said Cleary.  “I didn’t have a loan system that I could go to, and I didn’t want to take out any other loans in order to do this. So the grant was my only option.”

Cleary says she’s proud of being a homeowner, and of the entrepreneurial example she sets for her two sons and other Black women. For her, the house is an opportunity to build intergenerational wealth she didn’t have.

“I wanted to be an example for other minorities, Black women as well, and Black people as a people, that these opportunities are out here,” said Cleary

Serena Joyce White-Lake is an Albany Law School professor whose coursework covers the history of housing segregation. White-Lake believes philanthropic programs like those Cleary used are a good first step toward addressing the homeownership gap.

However, she says foundation grants are not enough to fully solve the problem and that pro-active government intervention is necessary. Government efforts that largely are still non-existent.

“The government created this issue, right? So we’re going to need the government to be involved in remedying this issue and narrowing the gap,” said White-Lake.