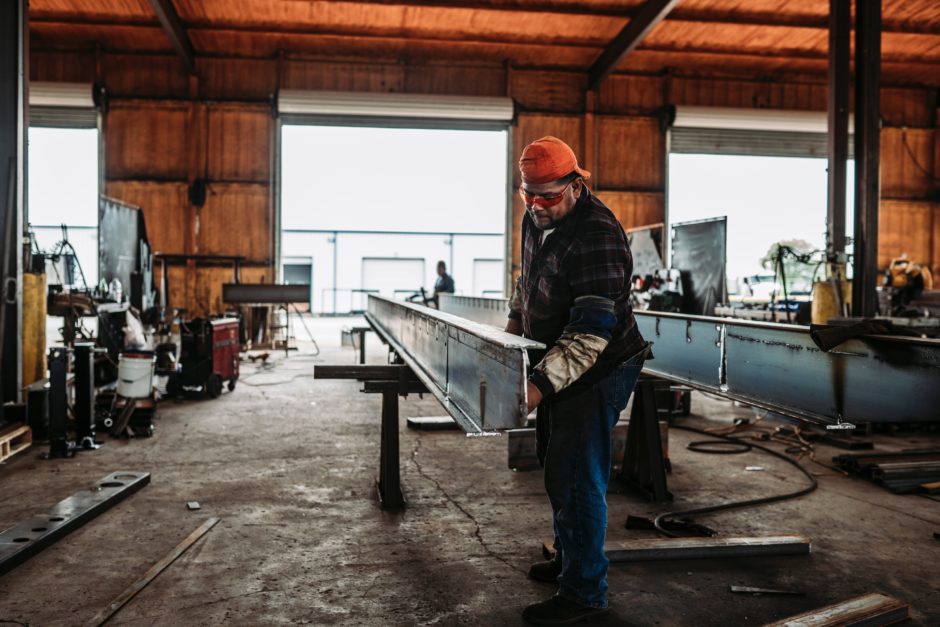 Manufacturers are doing a lot to attract workers, like offering higher pay and better shifts. But affordable childcare is rarely part of the bargain. (Photo by Kiefer Likens)

Cheryl Husk is a rodding operator at Century Aluminum, the smelting plant in Hawesville, Kentucky, where she has worked for the last 25 years. She works from 6 a.m. to 6 p.m. using a jackhammer to clean off large metal blocks of carbon, but when her shift is over, her other job is just beginning: her three-year-old grandson often awaits her at home.

“He’s rambunctious and runs and plays,” she said. But a recent injury at work damaged her shoulder, and Husk is still recovering from her surgery. “It’s getting harder and harder to keep up.”

Century Aluminum does not offer any childcare benefits, and neither do the employers of Husk’s daughter, a customer service agent, or her fiance, who works in a factory. That leaves the family in a never-ending shuffle to find care for their child, which sometimes means missing work. Their Kentucky community has few daycare centers, and a church-sponsored program filled up immediately. The unpredictable hours of manufacturing make finding a sitter difficult.

“It would be great to see companies step up and build onsite daycares, or another solution,” Husk said. “Something to help the workforce.”

Especially in rural America, childcare has become both unaffordable and unavailable – a problem that predates the pandemic but has grown worse during it. That makes returning to work more difficult for many as the economy recovers from the pandemic, a particular problem in manufacturing, which has faced one of the most acute worker shortages. That is slowing down production, raising prices, and worsening inflation.

Steel mills, aluminum foundries and other manufacturers have had to get creative in enticing workers back: raising wages, offering more favorable shift times, or even small things, like allowing workers to wear headphones on the job. They’re also trying to attract more women, who make up less than a third of manufacturing workers. But affordable childcare, the perk that could solve one of the biggest stumbling blocks for workers, remains out of reach.

With most manufacturing jobs in rural areas, the stakes are only higher. A recent mapping of childcare deserts – places with more than three children for every licensed child care slot – found that most were in rural areas, and that rural childcare facilities had fewer available slots relative to demand than urban ones.

Manufacturing remains at just 86 percent of its pre-pandemic workforce. That’s not for lack of demand: orders for American-made dishwashers, car parts and furniture have kept manufacturers busy, and been a growing engine of the economy. But labor has not kept up.

From 2002 through 2019, manufacturers usually listed about 300,000 job openings per month, and hired around the same number of workers. The recent manufacturing boom has made those figures unrecognizable. In January of 2022, manufacturers listed 851,000 openings, but only hired just over half that. Now, in a recent survey from Fisher & Phillips, 93 percent of manufacturers described their difficulties finding labor as "moderate to severe."

Shortages have exposed longstanding fault lines in the ability of manufacturers to find and retain talent, including access to childcare. The survey from Fisher Philips found that 35 percent of employers saw workers leave their jobs because of childcare. Carolyn Lee, president of the Manufacturing Institute, called on employers in an industry report to step up childcare benefits, saying that, "Unfortunately, finding high-quality childcare is still a difficulty for many parents."

Only 11 percent of manufacturing workers receive any form of childcare benefit, a figure that's remained flat for three years. While that's above the economy wide average, it falls short compared to 15 percent for all union employees or 20 percent for utilities workers. Economists see that as a stumbling block.

"For many families, childcare is basically required to go and do your job," said Gabrielle Pepin, a labor economist at the W.E. Upjohn Institute for Employment Research. "Since women tend to bear the brunt of childcare responsibilities even when they're working, childcare shortages keep down their labor supply."

Reasons for the gender gap range from a lack of recruitment by the industry to the ways that tasks are designed.

Manufacturers have made various efforts to attract more women. Campaigns like the STEP Women's Initiative have attempted to close the gender gap with women-focused educational programs as well as mentorship and networking groups to support women workers.

But the lack of childcare benefits widens that gender gap because women are more impacted by childcare disruptions than men. In the pandemic, women were twice as likely as men to lose their jobs because of childcare issues, and amid the omicron variant and quarantine requirements, women's participation in the labor force remained slower to rebound than men's.

Managers in male-dominated manufacturing plants might also have biases that keep them from offering the childcare benefits that would help them close their gender gaps, said Amanda Weinstein, an economist at the University of Akron.

"Starting a childcare program can already be very overwhelming," she said. "And if you have companies run by men, they might be more likely to think this is just too heavy of a lift,"

Still, some manufacturers are taking the leap. Sachin Shivaram is the CEO of Wisconsin Aluminum Foundry, which makes castings, engine parts, and cookware in Manitowoc, Wisconsin. Shivaram said that turnover rates jumped from 10 percent to 48 percent in the last year.

First he raised wages, bringing median pay to $27 per hour, then tried quality of life changes like free happy hours and allowing workers to listen to music while working. But more and more, his workers kept failing to show up because of childcare issues.

"That seems to be the key impediment for people to come to work regularly," he said. "We wanted to do something about it."

Last June, WAFCO began offering a $400 per month reimbursement for any type of childcare, whether in a licensed facility or with a family member. That would pay for about 30 hours of childcare in Wisconsin, on average.

But nine months later, Shivaram thinks the childcare crisis in their area is larger than one company can solve.

Employees still have trouble actually finding care, because waitlists run up to two years. Childcare workers in the region make $11.50 per hour on average, and that’s not bringing many into the industry. Shivaram is now working with other companies in the area to start a shared childcare facility and applying for funding from the state, but he sees a long road ahead.

"We want early childhood education like others in big cities, and all of that costs a lot of money," he said.

Manufacturers fixing rural childcare by forging public and private programs might seem far-fetched. But the current labor shortages are forcing many companies to think creatively. Buck Brinkley is the Executive Director of the Wisconsin Center for Manufacturing and Productivity. He consults with manufacturers across the state, and has noticed a pattern.

"The employers who put together an environment where employees are seen and feel valued – those are the places where the shortage has not affected them as much," he said. The others have been forced to adopt new ways of thinking.

"They're used to saying to workers, if you don't like it, you can find a job somewhere else,” he said. “If you're taking that philosophy now, you'll find yourself in a difficult position."

Husk, the Kentucky grandmother, has a vacation planned soon, and she’s looking forward to a break from her work at Century Aluminum. But her trip will throw a wrench into her family's childcare schedule for their grandson. Her daughter has had to adjust.

"She's had to rustle around. She's done some shift trading, and works Sundays to get days off," Husk said. "But it is constant stress. I don't see a solution right now."