The manufacturing sector continued to grow steadily last month, indicating that the economy as a whole is resurgent and tempering fears that any lingering effects of the Omicron wave would hurt manufacturing.

February’s manufacturing index from the Institute for Supply Management registered at 58.6%, an increase of 1 percentage point from the seasonally-adjusted reading in January, when the Omicron variant was racing across the United States, sending many workers home sick and stalling manufacturing. A percentage over 50 indicates growth. 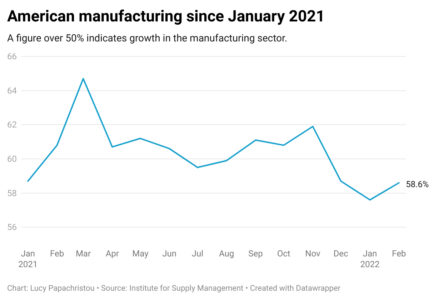 The numbers, which were released Tuesday, were a sign that American manufacturing remains strong and resilient in the face of labor shortages, supply chain snarls and high inflation, economists said. New orders are up and suppliers are getting better at delivering products—both good signs, as consumer demand remains high in a quickly-rebounding economy.

“I was a little bit fearful at the beginning of the year that the Omicron wave would have a bad effect [on manufacturing], but it’s been clear that that’s not the case,” said James Knightley, chief international economist at ING Financial Markets LLC. “The manufacturing sector keeps going from strength to strength.”

Of the 18 industries included in the index, 13 reported growth. February marks manufacturing’s 21st consecutive month of growth since it took a big hit at the beginning of the pandemic. The nonprofit Institute for Supply Management compiles the index based on a survey of purchasing managers at more than 300 manufacturing firms.

While economists predict manufacturing will remain strong this year, supply chain woes and underemployment continue to cause some problems. Manufacturers still struggle to get necessary supplies from overseas, and although there are ample jobs opening, manufacturing hirers expressed difficulty in finding qualified people who wanted to work, according to the report.

“The Omicron variant peaked in January, and it had delayed responses into February… It’s going to take some time for employment to be robust,” said Stan Shipley, an economist at Evercore ISI. Worker absenteeism has recovered somewhat as rates of Omicron subsided.

Shipley said that while the supply chain is “getting better, it’s not fixed yet.” The auto industry in particular is hurting: “They’re scrambling for chips and car parts. Demand is solid but they don’t have the cars to sell.”

The imbalance between supply and demand is the main thorn in the side of manufacturing. While new orders and productivity are up, the backlog of orders is also up and customer inventories dropped to 31.8% from 33% in January, both “warning signs” for Knightley.

“We’re seeing really good orders, but customers are desperate. Manufacturers can’t produce quickly enough, so they’ll have cost increases that they can pass on to customers. Order books are already full, and they’re getting fuller at a time when inventories and supply chains are very strained,” Knightley said.

Looking forward, all economists’ eyes will be on Russia. While the invasion of Ukraine didn’t affect February’s numbers, economists expect the surging oil prices will show in next month’s report. This geopolitical moment could prove to be a turning point for both the global and U.S. economy.

“If we look at what comes out of Russia and Ukraine, there’s a lot of base metals that go into electronics, automobiles, palladium, things like that,” Peter Morici, an economist and professor at the University of Maryland, said. “All these things in time will have to be replaced…The Biden administration will have to change its policy or the economy will become unstable.”

Morici said Ukraine could provide an opportunity to get back into fracking, which would boost U.S. manufacturing further.

“The Germans can’t build enough windmills in thirty days to replace natural gas [from Russia], but we can build fracking wells to fill demand quickly,” he said.

Other economists agreed, arguing that the higher oil prices precipitated by the invasion might even be a positive here in the long run.

“We’re an energy producer, much more than we were in the ‘70s and ‘80s, and [the war in Ukraine] is going to stimulate domestic drilling activity and employment in that sector,” Knightley said.

In light of the current precarity of the global economy, economists think the Federal Reserve will hike interest rates more moderately this month, by 0.25% instead of 0.5%, in an effort to tamper down record-high inflation rates.

“The situation with Russia means caution is creeping in,” Knightley said.

For manufacturing, rising rates should tap the break on growth and slow demand, bringing it more into balance with supply. But an increase in short-term borrowing costs for manufacturers could trickle down to suppliers and customers, increasing costs. The key for the Fed is to curb inflation while avoiding a new recession and job loss.

Although the initial hike may not be aggressive, the Fed “will be very clear they’re going to raise rates a lot,” Shipley of Evercore ISI added. March’s hike won’t be a “one and done.”