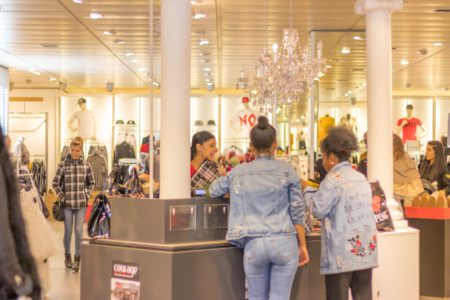 The Omicron variant made its rounds across the country in January, causing a number of employee shortages and shortened shopping hours. Yet, consumers continued to spend.

Retail sales rose 3.8% in January from December, a bigger gain than economists expected. Sales were up 13% from the previous year.

The strength in retail sales shows a recovering economy that is doing so without government aid. Pandemic unemployment aid has expired and several months has passed since the last stimulus check was distributed to Americans. As things began to feel somewhat ‘normal’, Omicron came and left many missing days of work and quarantined for several days. Consumer confidence may be low because of pandemic-related concerns and rising prices, but Americans are still making purchases and supporting the economy.

“The training wheels are coming off of the economy,” said Ryan Sweet, Head of Monetary Policy Research at Moody Analytics.

The growth in sales came after retail sales fell 2.5% in December. That decline may have been partly the result of consumers performing their holiday shopping early to combat the risk of empty shelves due to supply chain shortages.

“It's more like just a return to normal after a really poor end of the holiday season,” said Christopher Lowe, Chief Economist at FHN Financial.

The increase in spending was partly a symptom of inflated prices. Consumer prices grew 7.5% in January, the highest growth since 1982. Consumers might not have purchased more, but instead were purchasing goods they normally buy at a higher price.

“If you only buy one gallon of gas every month, the cost of that gallon goes up, then retail sales will record that as an increase,” said Michael Gapen, Chief US Economist at Barclays Capital.

The increase in spending can also be attributed to the surge in jobs in the economy and a spike in average hourly earnings as shown by January’s job reports. More people had jobs. Multiple industries reaped the benefits of this. The automotive industry experienced an 11.3% increase in sales, while furniture and department stores also saw sales peak.

As the year progresses, echoes from the pandemic relief efforts will be seen in upcoming retail sale reports.

“Consumers are sitting on a boatload of extra cash and that could be helping support spending this year,” said Sweet.

However, economists say this growth will taper off. Saved funds from pandemic relief payments  are expected to run out later for a number of people later this year. Rising interest rates will also affect consumer spending. The Federal Reserve is expected to raise rates in March, which will make it more expensive for consumers to borrow money towards larger purchases such as cars and homes.