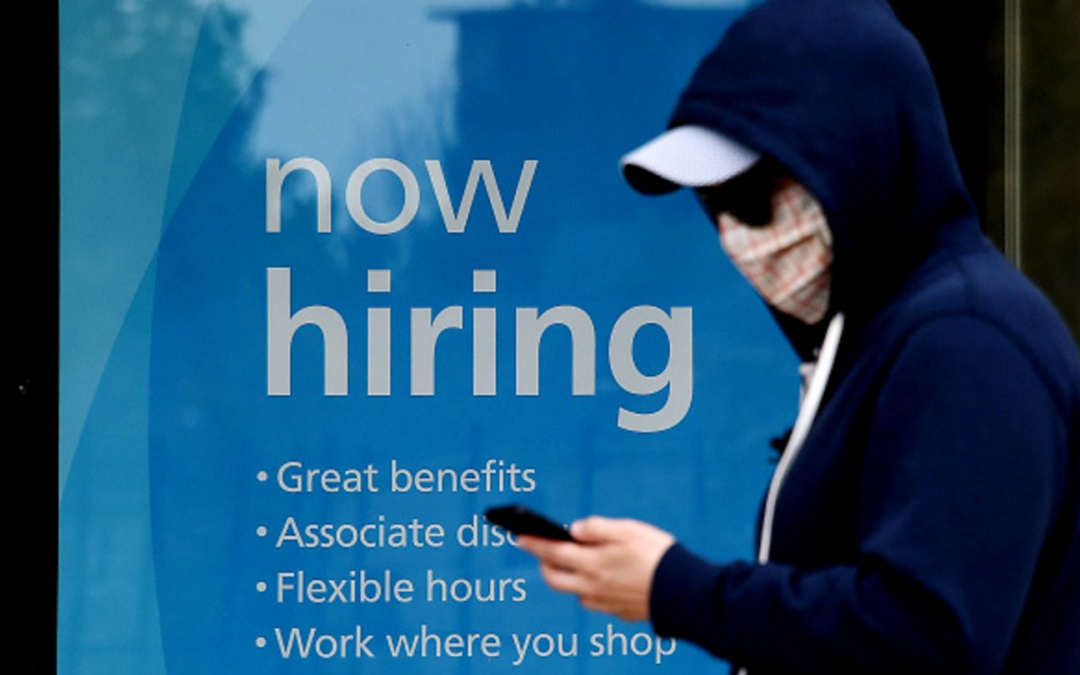 Hiring slowed sharply last month, a sign of the uneven economic recovery as companies scrambled to find enough workers in the face of surging consumer demand.

The economy added a disappointing 266,000 jobs in April, far below economists’ projections that about 1 million jobs would be added, the Bureau of Labor Statistics said Friday. The unemployment rate rose slightly to 6.1% last month, in part due to an increase in people entering the workforce.

Increased vaccination rates, federal stimulus checks, and the loosening of COVID-19 restrictions, combined with pent-up demand for certain foods and services, are coinciding to increase consumer spending across the country. The economy, now attempting to return to pre-pandemic normalcy, is also confronting capacity constraints, labor shortages, and supply chain problems.

“There’s a mismatch between supply and demand,” said Michael Englund, chief economist at Action Economics. “Trying to boost this economy and raise real growth is going to be harder than it appears because the real economy that’s growing at this point is unable to grow any faster.”

Of all the sectors, the leisure and hospitality industry, which includes restaurants, was the strongest in April, adding 331,000 jobs, as pandemic-related restrictions lessened in many parts of the country.

A year after reopening, the Hartford Restaurant Group, a company that manages 10 restaurants in Connecticut, is looking to hire 50 to 80 workers across all eateries. The management group was forced to shutter all of its restaurants for two months at the start of the pandemic in March 2020 and temporarily furlough workers. Upon reopening in May 2020, some chose not to return. The reduction in staff wasn’t problematic at first, but with restaurants resuming full capacity in March across the state and a comfortability among vaccinated Americans, it sent the company on a hiring frenzy.

“We just keep trying to hire more and more people, but it’s challenging out there. We’re not getting as many applications as we’d like,” said Phil Barnett, one of the owners of the Hartford Restaurant Group.

Many businesses have reported they can’t find enough workers to fill the many open positions, and the jobs report lends some credence to claims of a labor shortage beyond simply anecdotal evidence. The average weekly hours of workers increased by 0.1 hours to 35 hours, suggesting that business owners are asking their staff to pull longer shifts. Average hourly wages also rose by 21 cents to $30.17, pointing to the fact that employers have been willing to increase pay.

And hiring slowed even as the vaccine rollout accelerated, potentially implying jobless aid, rather than the health concerns, is discouraging some people from looking for work. Some companies blame the emergency unemployment benefits that are said to have dissuaded some workers from accepting jobs.

However, when asked Friday if the American Rescue Plan, which included $1,400 in direct payments and extended expanded unemployment benefits with a $300 weekly supplement, could have discouraged workers from seeking employment, President Joe Biden responded with a simple ‘no.’

“Economic analysis has indicated that job insecurity, particularly for someone who has a household and mouths to feed, would far outweigh the option of staying at home and collecting benefits,” said Beth Ann Bovino, chief U.S. economist at S&P Global.

Others have been unable to return to work due to fear of contracting the virus or childcare and parental burdens placed on caregivers during the pandemic. Kimberly Marshall, a single Black mother of two from Alexandria, Va., was forced to quit her job as an office coordinator at a local veterinarian’s office last May to care for her young children and elderly mother with dementia. She’s been out of work for nearly a year, unable to return to the workforce because her children, who go to school remotely, and mother cannot be left alone in the house.

Overall, the U.S. is still 8.2 million jobs shy of its pre-pandemic levels in February 2020, and job recovery has been uneven among race and gender. In April, 165,000 women dropped out of the workforce, meaning they are neither working nor looking for work, whereas 335,000 men returned. Unemployment rates were little changed among most racial and ethnic groups and remained persistently high for Black and Hispanic workers.

“As we move toward recovery, it is also important that we consider whether the recovery is equitable,” said Daniel Zhao, senior economist at Glassdoor. “Even though rising tide lifts all boats, it might not lift all boats equally.”

The increased unemployment rate does provide some optimism, as it means there are more people in the workforce even if they are unemployed. The labor force participation rate, or the number of people working or seeking work, was at 61.7% last month, the highest rate since August. Rising labor force participation is expected to help companies fill jobs in the coming months, though it will take time for some people to return from the sidelines.

To expedite the process, some companies are trying a range of new tactics to find — and keep — job candidates willing to work in-person and are aggressively competing for talent by boosting pay and offering other incentives to new hires. Link Abbadini got laid off from a job at Red Robin at the start of the pandemic and ended up quitting a second job where she worked at a call center in early December. Finally, Abbadini got tired of sitting around and started looking for a new place to work and she started working as a prepared foods clerk at a supermarket chain in Cleveland, Ohio, two weeks ago.