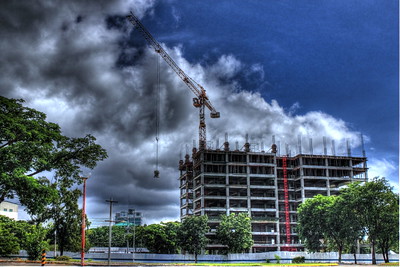 In most ways, the training sessions offered by the Arizona Department of Transportation earlier this year looked like any other construction-industry training course. Courses covered how to interpret construction plans and other work readiness skills. Participants also received OSHA and other certifications, allowing them to compete for jobs in the construction industry. But one thing about the course was different. It was only open to women.

The course was a first for Arizona, but the state is hardly alone. States across the country are actively recruiting women into construction, and it’s fueled by industry demands.

Nationwide, construction companies are struggling to find workers and they’re starting to actively recruit women into an industry that has largely been occupied by men. According to the US Department of Labor, nine out of ten construction workers in the US are men.

The Arizona Department of Transportation began targeting courses specifically to women because construction contractors were asking for it. “It’s a male dominated field, so it’s difficult for them [contractors] to advertise and recruit that construction is a good place for women in the workforce,” said Steve Navis, who runs the construction training program at the Arizona DOT.

“It’s a non-traditional work environment for women we typically say, but there’s plenty of positions and a need for women out in construction. A lot of contractors seek out women employees because they put more attention to detail, attention to equipment, and can multitask more than, we’ll say, younger males. And construction is booming.”

According to the Associated General Contractors of America, 81% of construction firms are reporting difficulty in filling salaried and hourly positions, and 65% estimate it’s going to be as or more difficult to hire over the next year. Bringing more women into that part of the workforce is one way to combat a shortage of workers.

Lisa Frazier, a 41-year-old mom of three, graduated from a construction training program earlier this year. She did her training through Habitat for Humanity in central Arizona, an organization that specifically recruits women for its program. “I needed to pursue a career change,” Frazier said when asked why she decided to move into construction. She was a finance manager in the auto industry for many years, and acquired a felony conviction. After that, Frazier was looking for a second chance.

She heard an employee of the construction training program speak at a Second Chance center. She was drawn in by Habitat for Humanity’s recruiter because he said they were looking to give people like her second chances. “He also spoke about the deficiency in the construction industry as far as employees and that women were able to get into that field and excel in that field.”

After graduating from the program in January of this year, Frazier got the first job she applied to. She now works at a demolition company. “Demolition is a hard job. But I have an immense sense of pride for what I do,” Frazier said.

Less than one out of ten construction workers in the US are women. Statistics from the National Association of Women in Construction indicate that the number of women in the construction field has grown steadily over recent years, but employers are still looking for the best ways to attract women to a field that has historically shut them out.

Women face many hurdles to increasing their representation in construction, one of which is the stereotype that it’s a man’s job. “I think sometimes when you close your eyes and visualize a construction worker, the head of the field, unfortunately, even the construction firm CEO a lot of the time, what people are visualizing are men, and typically older, caucasian men,” said Danielle Dy Buncio, CEO and founder of Viatechnik, a technology company that provides virtual design, construction and software development services. That means women are less likely to see a place for themselves in the industry, and construction companies need to actively recruit women.

Failure to recruit women feeds into a company’s culture, as well. “That starts to have this vicious cycle where when a strong female candidate goes and interviews with a company, and she interviews with four men,” Dy Buncio said as an example. “That’s a little voice that says, ‘you don’t belong there.’”

Dy Buncio, whose mother is Mexican and whose parents founded a construction firm when she was a toddler, actively recruits women and other diverse candidates to work at Viatechnik. “Once women are in organizations, it’s shown that because of that diverse perspective, they’re bringing in really unique, creative ideas. They’re fostering innovation, and that’s improving company performance.”

A 2015 study from the International Journal of Construction Education & Research, looks at ways to increase recruitment of women to construction management positions. “The two most influential factors in female selection of a CM degree [construction management] program were identified as: internships and awareness of career opportunities,” the study authors explain.

That bodes well for the construction industry- increased promotion and opportunity will bring more women into the industry. The study authors also noted that, “Having a father in the industry and non-internship work experiences were also seen as two highly positively influential factors.”

For Dy Buncio, that family connection was key. Three generations of her family have been members of the Hispanic American Construction Industry Association, also known as HACIA. “I definitely, like, have memories of going to job sites as a kid, you know, going to their office after school, doing my homework,” Dy Buncio said. “I was definitely immersed in it. I always really loved the industry.”

Frazier says two of her children want to work in the construction or housing industries once they’re older. Her daughter in particular is inspired by Frazier’s new career, and has told Frazier, “‘because you can do this, I want to,’” Frazier said.

“I’m one of the few [women],” Frazier said about her workplace. But she doesn’t let that deter her from being comfortable at work and doing her job. “I think that the guys maybe feel more uncomfortable than I do. I think they’re more apprehensive because maybe they feel they can’t act or react the way that they used to,” Frazier said. “And maybe that’s a good thing.”