The U.S. Consumer Prices Went Up 0.1% in January But Inflation Slowed Down. 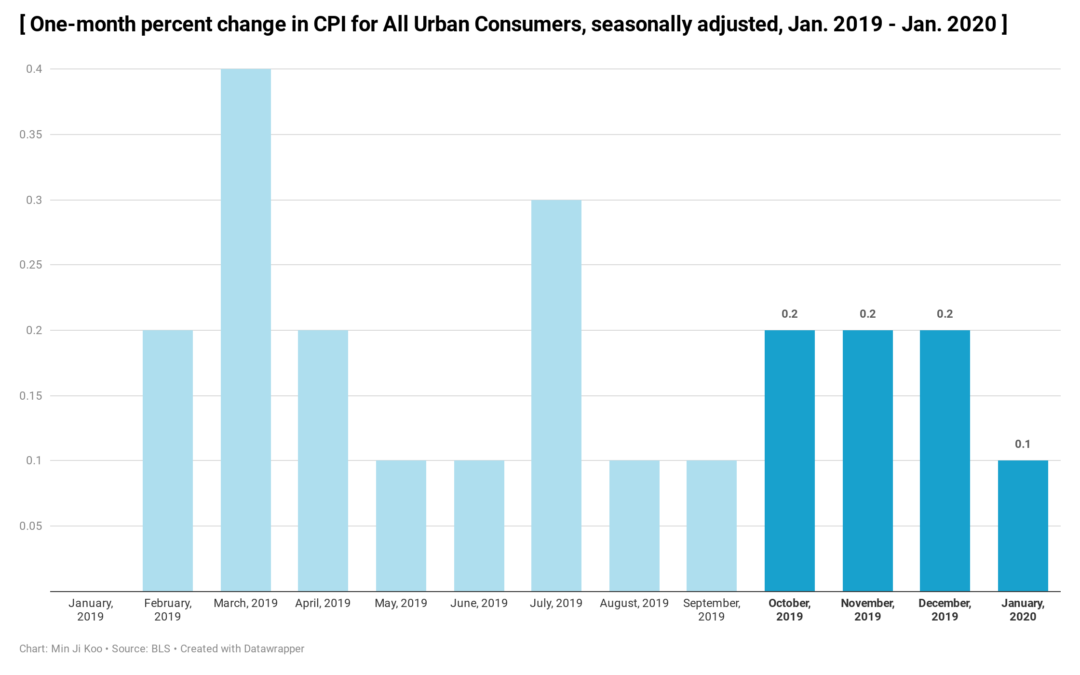 Underlying consumer prices rose in January due to the rise in prices of rent and medical care.

The consumer prices index, which measures how much consumers are paying for goods from food, apparel, to other items, went up 0.1% in January, the Bureau of Labor Statistics reported on Thursday. It recorded a lower increase than the previous four months.

Over the past 12 months, prices have increased by 2.5%, the biggest year to year increase in the last 12 months. The cost of rent went up 0.4%, and the cost of housing, including co-shelter costs and rent costs, mainly drove the slight rise in the inflation rate in January.

Costs of medical care also contributed to inflation by going 0.2% up in January and 4.5% up over the last year. Health care costs are the most rapidly growing area of inflation. The cost of hospital services showed a 0.8% increase. Only prescription drug prices went 0.4% down in January, but it is 2.5% higher than a year ago. The prices of drugs continuously rise while new versions of drugs are released in the market with higher prices.

“The decline of the prescription drugs costs is a good sign,” said Gallagher. “But, considering the past growth of the costs, it’s hard to expect further declining.”

However, energy prices, declining as a result of the COVID-19 outbreak, will hold inflation in check over the coming months.

Gasoline prices fell by 1.6% and energy prices by 0.7% from the last month in January. The coronavirus, which was renamed to COVID-19, reduced the global demand on oil and energy as it slowed down the Chinese economy. This trend will be continued for the first quarter of 2020 because of the ongoing influence of coronavirus and tame economic growth.

“For the next few months, energy prices will continue to pull down the rate of inflation,” said Stephen Gallagher, a chief economist of Societe Generale. “We should keep eyes on gasoline costs.”

Given the strength of the economy, including the tight job market, inflation can have some moderate acceleration. Still, there will be no sharp acceleration considering the upcoming effect of China’s economic downturn under the impact of the coronavirus.

“We have a stable and subdued picture of inflation, and there’s no sign of change,” said David H. Sloan, a senior economist of 4CAST. “The fact that CPI is not picking up indicates the inflation can remain below the target.”