U.S. Trade Deficit Narrows for the First Time in Over Half a Decade 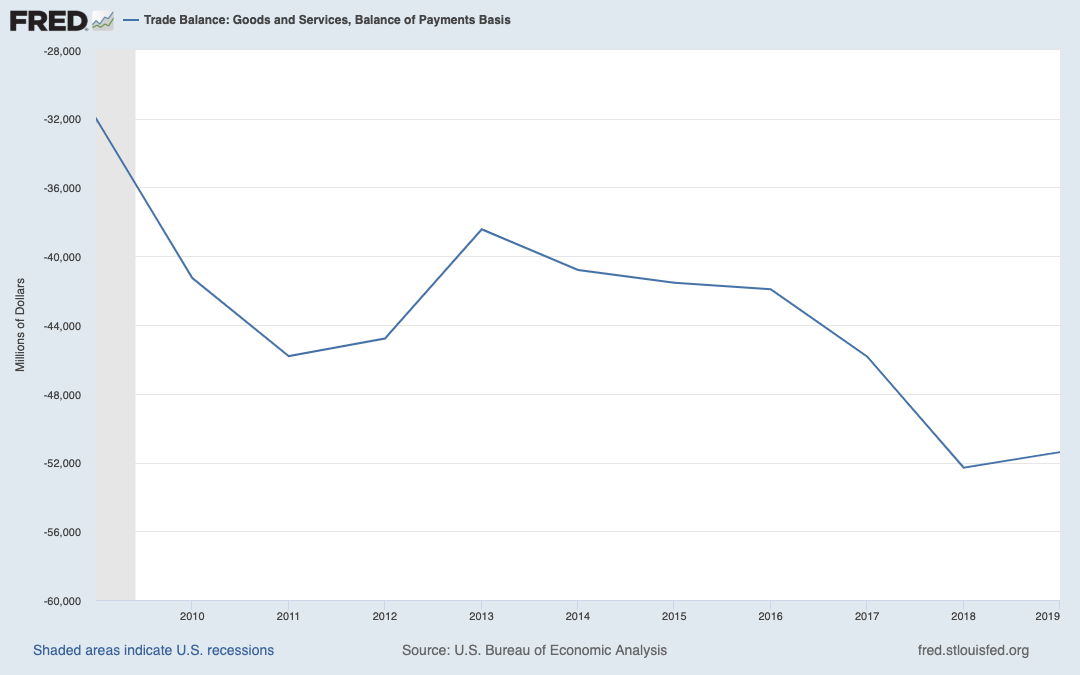 The United States’ international trade deficit shrank last year for the first time since 2013, as the U.S.-China trade war reduced imports and slowed global trade — but the trend will likely reverse this year as the market returns to normal.

The U.S. trade deficit fell 1.7%, to $616.8 billion in 2019, according to numbers released by the Commerce Department on Wednesday. The numbers reflect the nation’s significant decrease in imports over the year, combined with the slight decrease in exports for the first time since 2016.

The monthly trade gap grew in December, however, after falling to a three-year low in November.

President Donald Trump has made narrowing the trade gap a signature goal of his administration. But to most economists, the shrinking gap isn’t necessarily a good thing. A decrease in imports is a sign that Americans are spending less, which is the sign of a slowing economy.

Nevertheless, economists don’t expect the gap to narrow again in the near future. Last year’s numbers were driven by factors that are unlikely to be repeated in 2020, including the trade war with China, the United Auto Workers strike against General Motors Co., which halted production at several plants and factories, and the production freeze of Boeing Co.’s 737 MAX airplanes, which contributed to the decrease in U.S. exports. Many economists expect the trade gap to widen again in 2020.

“We have to see how much of that really sticks,” said economist Ryan Sweet of Moody’s Analytics. “We’ll probably see the deficit gap reverse in the first three months of 2020.”

Indeed, the trade gap may already have begun to grow again. Wednesday’s report showed that the deficit rose 11.9% in December, in what economist David Sloan at Continuum Economist calls a “correction” to the “special circumstances” that occurred during the other months.

The trade war between the U.S. and China fueled most of 2019’s deficit numbers, with both countries going back-and-forth enacting tariffs after tariffs upon each other. As a result, the U.S. deficit in goods with China dropped 17.6% last year, to the lowest it’s been since 2014. The countries came to a raw trade agreement towards the last quarter of 2019, with China agreeing to buy more U.S. goods, such as cars and oil, but concerns that the recent coronavirus outbreak in China may cause delays in the deal are looming.

Though the U.S.’ trade gap with China narrowed because of the trade war, the U.S.’ deficits with other countries expanded as the U.S. started trading more with them. The deficit with Mexico increased 26.2% to a record $101.8 billion, while the trade gaps with Canada increased 42% to $27 billion.

In order to contain the virus, China’s government has grounded flights, halted factory work and quarantined millions of Chinese people, heavily weighing on the economy. But, despite the country’s current situation, China announced a couple days ago that it would reduce tariffs on thousands of American products, in a sign that they intend on implementing the phase one trade agreement.

“China’s policy response is trying to stimulate the economy and is more likely going to be needed,” in light of the coronavirus’ effect on the economy, Sweet said.

As China and U.S.’ trade agreement starts to take effect and the automobile manufacturing industry recovers from the UAW strike, economists expect the first quarter of 2020 to shift the trade deficit back to normal moving forward.