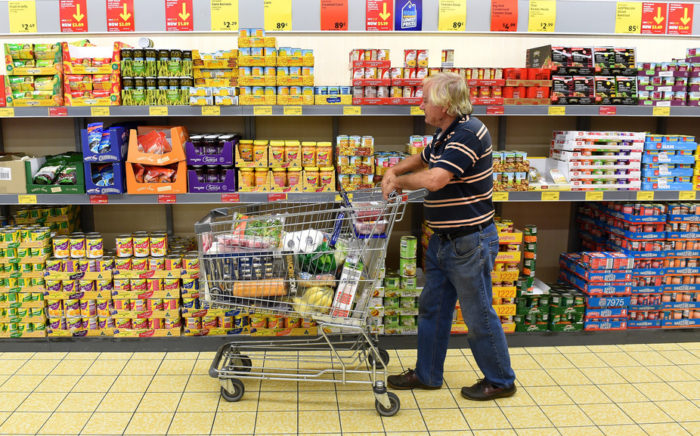 U.S. consumer prices rose more than expected in January due to gasoline, shelter and medical care, raising concerns that inflation is picking up and interest rates will follow.

The consumer price index rose by 0.5 percent in January, exceeding the economist median estimate of 0.3 percent. The so-called core CPI, which excludes food and energy due to volatility in prices, increased 0.3 percent, higher than the estimated 0.2 percent.

Coming off of a strong jobs report, which included a 2.9 percent increase in average wages last year, the latest CPI numbers suggest inflation is making a comeback.

“It challenges the view that the markets had, that inflation is going to stay low forever,” said Paul Mortimer-Lee, chief economist at BNP Paribas. “Prices and wages are picking up.”

With the global economy growing, the U.S. labor market tightening and the weak dollar all in lockstep, inflation is expected to gradually increase.

“These things emerge slowly over time and the trend is definitely for faster wage increases and faster price increases, but edging up steadily and steadily,” Mortimer-Lee said.

All these factors, coupled with the stimulus from tax cuts, have investors worried that the Fed might act more aggressively in raising interest rates.

As it stands, the U.S central bank has called for three rate hikes for the year. The first increase will be decided at the next policy meeting, in March. The higher-than-expected inflation may lead the Fed to institute a fourth hike in 2018.

Some economists cautioned that seasonal factors may have exaggerated the underlying strength of the inflation picking up.

The cost of apparels, which jumped to 1.7 percent for the month of January was the largest monthly increase since February 1990. But despite the jump, online shopping will continue to place downward pressure on apparel costs, as shopping online empowers consumers to compare prices and snag bargains. 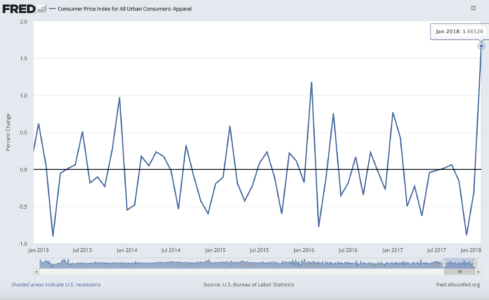 The cost of apparels in the past five years have been in modest deflation. The jump to 1.7 percent is an anomaly.

“People are very price conscious,” said Michael Gapen, chief US economist for Barclays Capital Inc. “Whether you are a traditional retailer using an online website, or a place like Amazon, prices online are lower than prices in the store.”

Used cars and trucks increased by .4 percent for the month. This was largely due to spillover from the surge in auto purchases following last year’s hurricanes. Once demand levels off, so will costs for used vehicles.

“We look at a couple of transitory factors that are unlikely to persist,” said Gapen, who believes these increases are temporary.

Americans spent more at the pump in January, as gasoline prices increased 5.7 percent after falling in December. The shelter index also increased 0.2 percent and medical care rose by 0.4 percent.

The year-on-year rise in the core CPI remained unchanged at 1.8 percent in January.