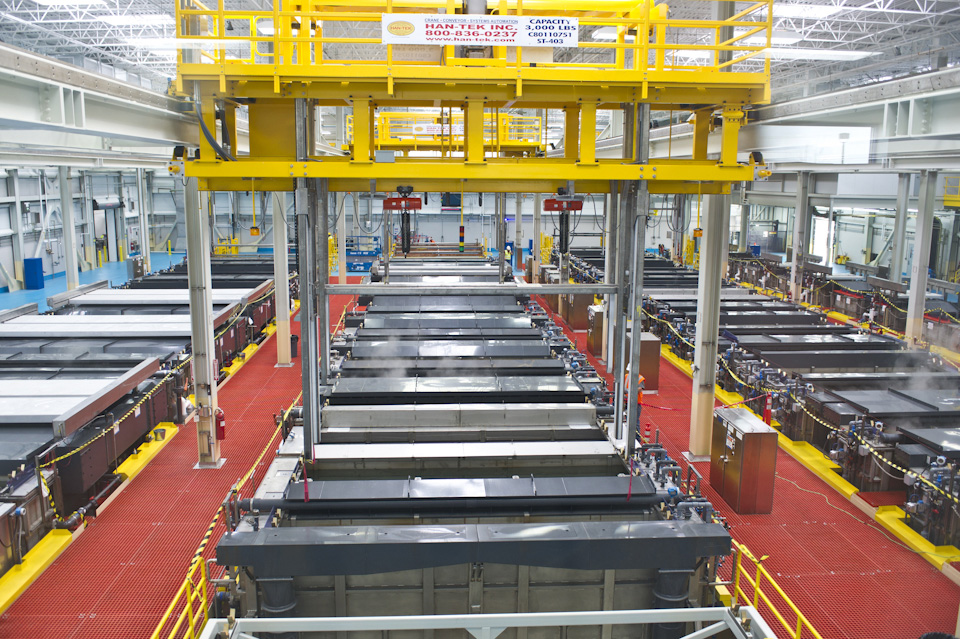 Manufacturing continued to make only modest gains in February as producers struggle to compete globally and wait for the White House to produce fiscal policies that will stimulate significant growth.

New orders for durable goods, products that last for more than three years, increased by 1.7 percent in February, the second-straight month of gains. But most of that growth was from the aviation sector, which is volatile from month-to-month. While any gains in manufacturing are encouraging, economists said, the high cost of the dollar is keeping American manufacturers from expanding and creating jobs.

“You’re seeing, in general, the durable goods numbers moving in the right directions,” said Chad Moutray, chief economist for the National Association of Manufacturers. “Beyond that, it would be nice to see a broader based growth.”

The biggest increase was in nondefense aircraft orders, which increased nearly 47 percent. But those gains were offset by declines in other areas, including motor vehicles, communications and fabricated metals.

One of the biggest impediments to widespread growth in American manufacturing is the price of the U.S. dollar, which has been climbing steadily since 2011. A strong dollar disadvantages American manufacturers as exports become more expensive and American imports cheaper.

European manufacturers, particularly Germans, have been growing at a much faster pace. In March, Eurozone manufacturing surged to a 71-month high according to the Flash Eurozone PMI Composite Output Index maintained by Markit.

That streak has come at the expense of some American manufacturers.

Michael Smith runs a California-based division of Georg Fischer Signet, a measurement and control equipment manufacturer. Over 50 percent of his products are exported, much of that to Europe. With the economy expanding, he said demand has increased. But because of the price of the dollar, he has been unable to turn additional sales into more revenue. To stay competitive, Smith was unable to raise prices, despite rising costs.

“You keep the volume to keep the factory loaded, but you lose the revenue and margins because of the exchange rate,” Smith said.

A weaker dollar would allow his company to raise prices and allow the growing demand to benefit the company’s bottom line.

The Trump administration has criticized foreign competitors, including Germany and China, for unfair currency policies that disadvantage American manufacturers. Now with the failure to pass healthcare reform on Friday, President Donald Trump promised to focus on tax reform.

Lower taxes and the removal of some regulations could help US manufacturers compete, economists said.

“Getting the tax cut through will make a big difference,” said Peter Morici, a professor of international business and economics at the University of Maryland. “That would lower the tax rate on a lot of your heavier industries.”

Trump campaigned on a promise to bring back manufacturing jobs to the United States and was elected largely thanks to voters in rust belt states like Ohio, Michigan and Wisconsin, who believed he would follow through.

The administration’s website maintains that eliminating regulations and lowering taxes will achieve his goal to bring back those jobs.

However, while those measures will help manufacturers in some ways, a stronger U.S. economy will further increase the price of the dollar, especially as the Fed continues to raise interest rates throughout the year. It’s not clear whether the gains from lower taxes will outweigh the increased burden of a stronger dollar, economists said.

So far, the modest growth experienced by the economy as a whole and the manufacturing sector has yet to benefit workers.

“We see low unemployment rates, some increase in the quit rate, but we don’t see much impact on wages,” said Robert Brusca, chief economist at Fact and Opinion Economics. “If the workers aren’t benefiting, how is the labor market getting tighter?”

In addition to tax reform, the president has also reached out to manufacturers to ask what infrastructure projects would most benefit them. Producers’ measured optimism could tide over the sector as they wait to see how that new spending will materialize.

“We’ll start getting a sense of where we’re going with a major infrastructure package,” Moutray said. “We have a lot of manufacturers who would benefit from a trillion dollars in infrastructure spending over the next decade”