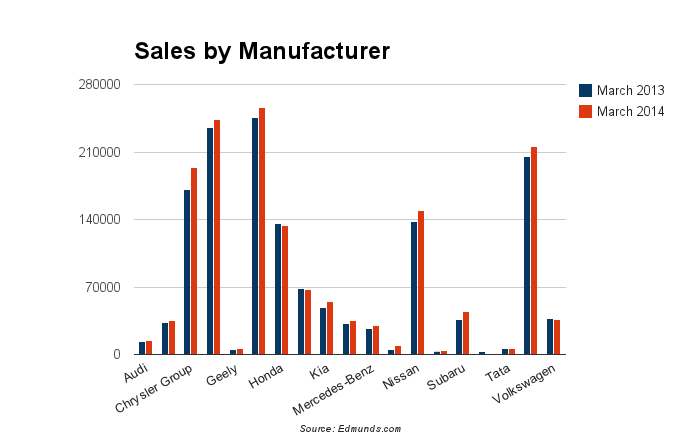 But consumers return to the marketplace to purchase a new vehicle as temperatures started to warm up, wasn’t the only factor that contributed to the sales surge.

“Incentives are the highest they’ve been since the recession,” said Haig Stoddard, an industry analyst at WardsAuto.com. Towards the end of the month, Stoddard said there was a big rush to buy cars. Consumers pounced on aggressive incentives that were advertised at dealerships, via the web and radio.

Pandora Media Inc. launched its in-car automotive ads in January of this year. The internet radio giant began partnering with automakers in 2010 to increase revenues from the market. When winter snow storms and blizzards hammered the east coast– advertisements slowed, along with car sales. Now, local manufacturers and dealers are streamlining discounts and incentives to be broadcasted.

“We expected to see a stronger push from companies in this area,” said Lauren Hirsch, senior account executive at Pandora. “Cars were frozen to dealers lots in this region, so we are seeing more and bigger incentives being offered from manufacturers and their dealer networks,” she said.

The overall stronger than expected growth signals a good sign for companies that are predicting annual sales to surpass last year annualized rate. Sales were almost back to pre-recession levels, matching the best month since the economy tanked in 2008.

“These impressive numbers indicate that automakers have recouped losses from January and February, said Douglas Porter, an economist at BMO Capital Markets. “March sales will set the pace for the rest of the year, which seems relatively positive at the moment.

Most companies posted an increase in sales, aside from Hyundai/Kia and Volkswagen. Both manufacturers continue to slip in market share and sales because of the lack of new models and popularity in brands.

General Motor recalls for fatal ignition problems didn’t dampen the companies sales, even after analysts’ predicted only an 0.8 percent gain. The company was the last to announce it earnings, but sales were up 4 percent.

Kelley Blue Book analyst, Alec Gutierrez, said that recalls tend to play a very little role in sales performance. He added that consumers aren’t looking at the company unfavorably, but “that doesn’t mean it won’t have a long term-impact.”

As of now, the outlook for the 2014 annual sales looks promising. With consumer confidence hitting a six- year high last month, people are more likely to come to the marketplace.