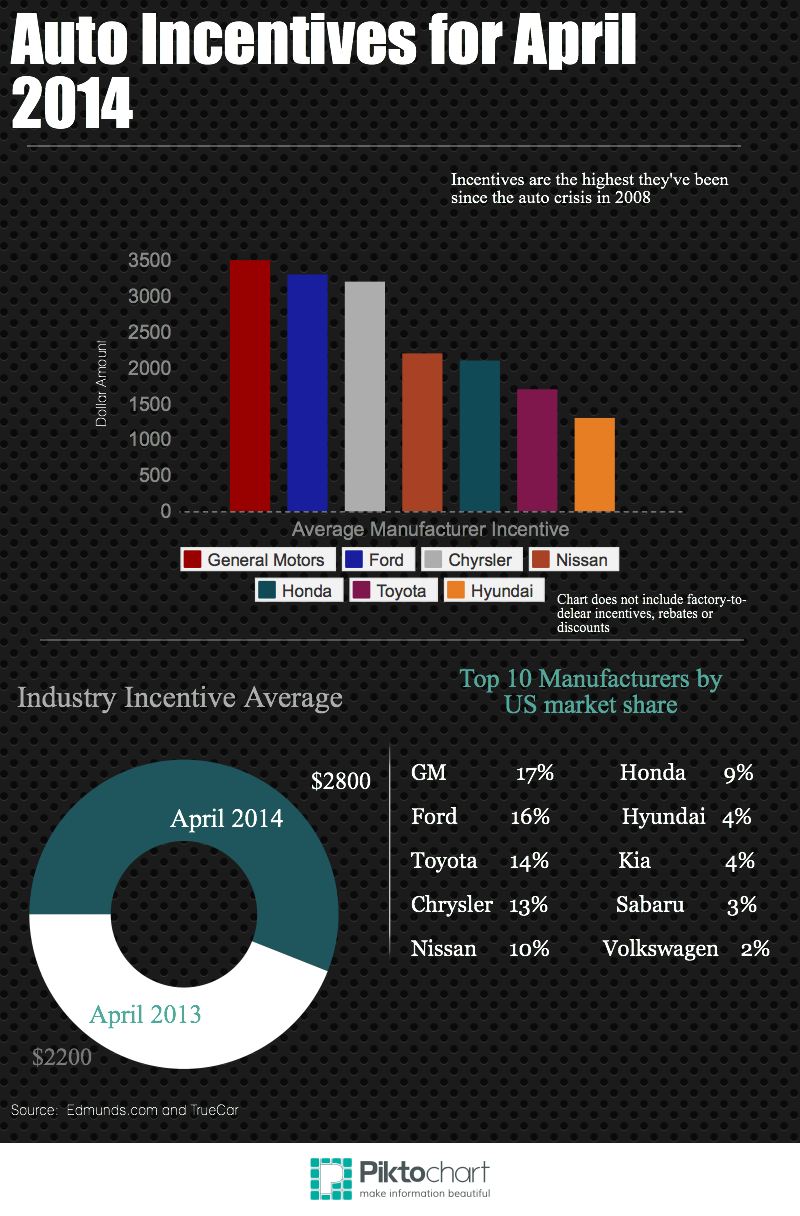 Automakers are reacting to dismal winter sales by extending discounts through April, leaving dealers with clogged inventories worried that price cuts will be at the expense of their profits.

When snow and ice storms ravaged several eastern states, Nissan salesman, John Foley expected foot traffic, along with sales to slow at his dealership in Chesapeake, Virginia. But the 2013 models that are sitting on his lot is becoming harder to sell as new units with discounts attached start to roll in.

We have to reduce levels now,” said Foley, whose inventory has surpassed the industry normal 60-day supply. “The longer a car is in stock, the more we’ll have to discount it.”

The average inventory for the month of February reached 75 days, according to industry analysts’ at WardsAuto.com. Now, car companies intend to shake off sluggish winter sales with more aggressive incentives to offset their loss as temperatures start to rise.

Incentives range from robust discounts to low interests rates. But not everyone think this is a serious problem, given that inventories have become unseasonably high.

“This is a ‘temporary phenomenon’,” said senior economist, Russell Price at Amerprise Financial. “It’s just the matter of time that they have to maintain discounts to get levels back down to what is normal for this time of the year,” he said.

This brings little comfort to Foley as his profits are feeling squeezed because of the excessive incentives.

“There is a lot of pressure from the manufacturer to buy more cars and Nissan has a very aggressive growth plan they are committed to.” “We have to get rid of our aged inventory, so you find yourself taking deals that you wouldn’t normally take,” Foley said, adding that dealers are forced to lure in customers with additional discounts on top of automaker deals.

Most companies reasoning behind discounts is to clear out the remaining stock in order ramp up production for newer models. And, oftentimes, dealers are offered incentives that can potentially enhance profits margins, depending on their sales performance.

“I was around when things got really ugly,” he said, recalling the auto crisis in 2008 and discounts and rebates skyrocketing. “Once you have gone to those high incentives, it’s hard to get away from it because consumers will expect them—that will cripple dealers.”

With incentives at the highest they’ve been since the recession, analysts’ say they result in increased sales, but automakers should be cautious.

“Overall, there is pricing pressure on everyone,” said Haig Stoddard of Wardsauto.com. “Since incentives will be going on through April, if credit companies are offering low interests rates, the manufacturer will be hurt depending on how big the incentives is.”

Almost all manufacturers are offering deep discounts and robust rebates on new brands. Typically, incentives tend to be higher for domestic brands. General Motors (GM), Ford and Chrysler have historically offered the biggest incentives. GM average incentive is roughly $3500—the highest of all automakers

The average incentive per vehicle for the industry is around $2,800 per car for—up 8 percent from last year in April, according to TrueCar. The Ford Focus is among the most discounted cars on the market, with a 16.7 percent discount off the retail price.

For April, Nissan is averaging $2,200 per vehicle.  Nissan has priced down every model, except for its newest sport utility vehicle– the Nissan Rogue. But hefty discounts can also strain auto dealers who are in markets where consumer demand for certain types of models are weak.

“They will price a car that will be harder to sell in one market than another,” Foley said, that certainly doesn’t make for a happy marketplace.”

As ongoing incentives have created an atmosphere where customers are negotiating even steeper discounts, auto dealers should brace themselves for the months ahead.

“Very rarely do you see customers come in willing to pay the sticker price,” he said. “But, sometimes there is just too much money on the line and you just can’t miss deals.”