Personal Income and Spending Is Up Thanks To Obamacare 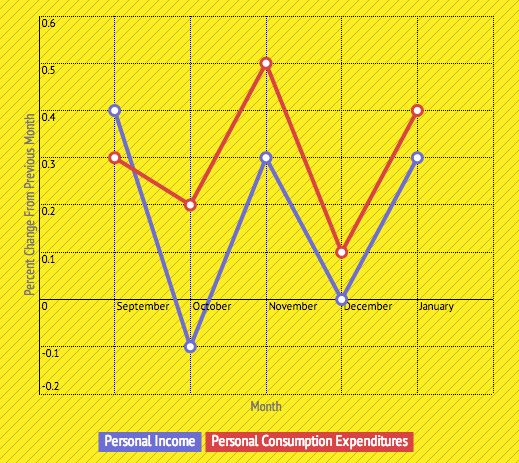 Americans are making more and spending more, and they largely have the Barack Obama’s signature healthcare law to thank.

Personal income increased 0.3 percent in January, a higher growth than expected, and consumer spending increased 0.4 percent. Obamacare added to the growth in both cases.

Two major provisions of the Affordable Care Act (ACA) went into effect in January, the expansion of Medicare, Medicaid and CHIP benefits, and the opening of the health care exchanges where individuals can purchase insurance who are not offered it by their employers, who are part-time or who are self-employed.

These two provisions boosted consumer spending because more Americans were receiving social benefits in the form of Medicaid payments and premium tax credits.

Medicaid is counted as a federal social benefit, and starting at the beginning of 2014, an expansion of Medicaid went into effect that resulted in increased social benefits for Medicaid recipients. Those benefits count as personal income expenditures, which contributed to the growth in consumer spending in January.

Individuals also began purchasing their own health insurance on the exchanges in January, some assisted with a government subsidy in the form of a premium tax credit. The premium tax credit subsidy is refundable, meaning that taxpayers who have little or no income tax can still benefit.

These refundable tax credits count as social benefits, which is included as an income expenditure, meaning that the Affordable Care Act accounted for roughly three-quarters of spending growth in January.

It is difficult to see whether the impact of the ACA on personal income and spending is positive or negative, but it is clear that this was an abnormal report.

“This is a really abnormal report in my mind because of all the implications of healthcare and the impact of severe weather,” said Charles Londa, Senior Vice President at Morgan Stanley. “I think because this is so new it’s very interesting, but the implications of it are not known,”

The reality is that the country will not understand the full implications or impact of the ACA on personal spending and consumption until its affect is tracked over time to identify real trends.

“It’s the trends that affect how the markets find their direction, that’s why these reports are really looked at in terms of trends, that’s where you see the impact and those trends probably have broader implications for the economy,” Londa said.

The report’s impact on the market was muted, partly because of the large geo-political issues, namely the conflict in Ukraine and Venezuela, which overshadow it.

“Our analysts are showing little reaction from the market, partly because this report was not significantly different from people’s expectations, plus it wasn’t controversial,” Londa said.

The governmental effect on personal income and expenditures wasn’t all positive in January, which also marked the suspension of federal unemployment benefits for 1.35 million Americans. That meant a reduction in $16.7 billion in benefits.

Taking special factors out of the equation, however, personal income only increased 0.2 percent in January. That followed a 0.1 percent increase in December, making for a unspectacular growth in personal income this winter.

January’s increase in spending was also driven by a 0.9 percent jump in services, the biggest gain since 2001, reflecting an increase in demand for heat during the cold winter months.

The shift in spending more on utilities meant that consumer spending on goods fell 0.6 percent, indicating that people had to spend more on heat in the past month due to unusually low temperatures and severely cold weather that plagued most of the country.