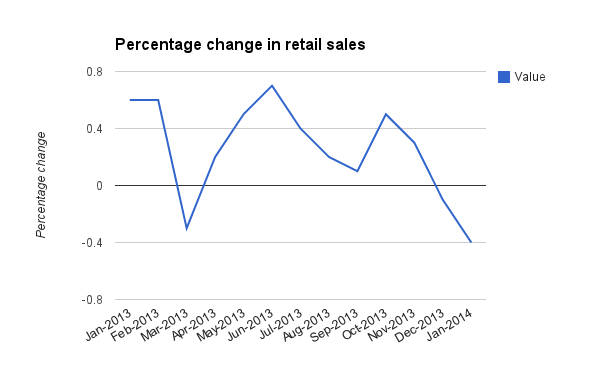 Retail sales figures for January released Thursday were disappointing with a sharp drop from the previous month.

Most economists blamed the weather for the weakness.

“The only two sectors where I see some potential concerns are sporting goods and nonstore retailers,” said Nathaniel Karp, chief U.S. economist at BBVA Compass. “The first one could have been heavily influenced by the weather so I expect a rebound.”

The ‘Sporting goods, hobby, book & music stores’ category of the retail sales indicator declined by 1.4 percent with respect to last month. If indeed a colder than usual winter has kept shoppers away from stores, spending can be expected to resume once the weather improves.

However, compared to the same month a year ago, January’s retail sales actually increased by 2.6 percent (not adjusted for inflation, which in 2013 was 1.5 percent). This comparison shows that as the economy recovers, people are indeed spending more.

In recent months, various categories have shown weakness only to rebound. Auto sales, an important part of the indicator, have been especially weak in large part due to the weather.

Cars are an example of discretionary spending, which could rebound once spring arrives. However, the poor performance of retail sales in the past couple of months is not only a chill induced by snow and cold temperatures according to some economists.

“It’s a bit more than a weather related weakness,” said Yelena Shulyatyeva, a U.S. economist at BNP Paribas in New York. “At the end of last year, people were excited that private consumption was gaining momentum,” she said.

Now, the picture is different because the revisions of the previous two months demonstrate that retail sales were not as robust as originally forecasted. In fact, the percentage change in retail sales started declining since it peaked last October, as shown in the accompanying graph, before becoming negative in the past two months.

All in all, even if retail sales suffered due to the unusually inclement winter that struck the country, we will only know that once the spring months arrive.

“It’s going to be several months before we get an answer to this question,” said Richard F. Moody, chief economist at Regions Financial Corp.