More People on Food Stamps Even as the Economy Improves 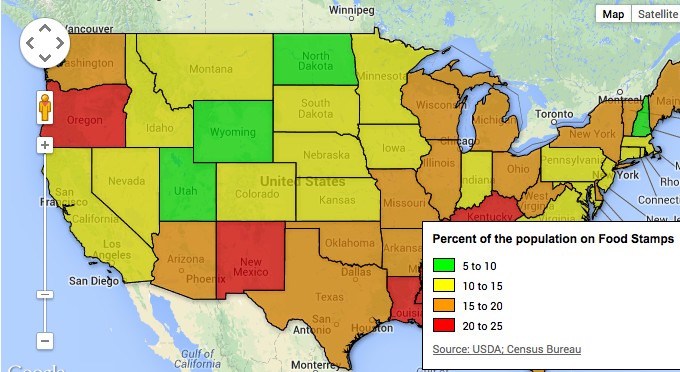 Latoya Stevens of Laredo, Texas, in the third poorest congressional district in the country, is a single mother who works as part-time sales assistant. The only reason her daughters have food on the table is because they receive food stamps, $400 a month. Even so, twice a week Stevens takes her daughters to a food pantry.

“We are not starving, but my kids are constantly thinking of food,” she said. “They can’t focus on what they should focus on, and I blame myself for that.”

Stevens is among 47 million Americans receiving food stamps, the common name for the Supplement Nutrition Assistance Program, the largest food-assistance program in the USA.

Despite the general improvement in the economy, the number of food stamp recipients is soaring, reaching 48 million last December. The cost has jumped to a record $80.4 billion last year. Both are signs that the economic recovery has bypassed lower-income Americans and has left millions of children in worsened circumstances.

“It’s not about having a job,” said Greg McBride, senior economist at Bankrate.com, speaking about eligibility requirements for food stamps. “It’s about having or not having enough money to buy food for the family. The jobs that are available now are not the ones that help people become richer.”

In April the number of people who work part-time but want a full-time job reached 8 million, according to the Labor Department. More than 80 percent of Texas households that received food stamps in 2011 had members that were employed at some point within a year, according to the Texas Food Bank Network’s report released last week.

Although unemployment has been declining for the last three years, hiring has been concentrated in relatively low-paid service-sector jobs in retail, health, restaurants and bars. Currently, nearly one out of every 13 jobs is in the food service industry, which has been growing for 38 consecutive months.

“It’s not that food stamps don’t do the job; the only way to reduce food stamps is through reducing poverty,” said Mark Rank, a professor at the Geprge Warren Brown School of Social Work who specializes in poverty, adding that he doesn’t see any signs that the number of the lower-income Americans will decrease in the coming years.

Eligibility for food stamps varies in each state, but generally depends on household income and assets. Households with income at or below 130 percent of the poverty level are eligible for food stamps. (In 2013, the federal poverty line for a family of three is $1,591 a month; that is, a family of three should make a little more than $2,000 a month to qualify for food stamps). In 2009, President Obama lowered the requirements for food stamps eligibility, a move that received protests from the Republicans. Last year, former House Speaker Newt Gingrich dubbed Obama “the food-stamp president,” since under his presidency enrollment in food stamps soared 70 percent. However, there is still a direct correlation between poverty and food stamps eligibility. The number of people in poverty rose from 43.6 million in 2009 to more than 46 million in 2010, the largest number in the 52 years for which poverty estimates have been published, according to U.S. Census Bureau.

The impact on children is especially devastating.

Almost half of all food stamp recipients in 2011 were children, according to a report by the Department of Agriculture in September 2012, the latest statistics available. At the same time, more than 16 million kids lived in food-insecure households, meaning that parents didn’t have consistent access to food and didn’t know when the family’s next meal would be.

Despite the growing cost of the food stamps program and the general improvement in the economy, the number of people struggling to get food is increasing. After soaring in 2007 and 2008, the rate of food insecurity in the USA has remained steadily high, with 16.1 percent of families struggling to bring food to the table, according to the Department of Agriculture.

“The use of food stamps is a perfect indicator of the economy,” said Rank.

Between ages 1 and 20, almost half of all American children will, at some point, rely on food stamps, Rank concluded in his study “Estimating the Risk of Food Stamp Use and Impoverishment During Childhood,” published in 2009. The research complements a number of research papers showing that childhood poverty in a food-insecure family is likely to lead to health problems and a decline in future academic achievement.

“The most stupid thing for the country to do is to have 16 million hungry kids,” he said.

For children in Laredo, Texas, like Juana and Melissa, Alfonso Casso, executive director of South Texas Food Bank, organizes free daily afterschool meals. Laredo was the site of the 2011 shooting at a Texas Department of Health and Services building when a mother of two, denied food stamps for months because she couldn’t provide enough documents to prove she was eligible, shot her kids dead and then killed herself after a seven-hour standoff with the police.

In an afterschool program called “Kids Café,” the South Texas Food Bank gives children food,
“so that they are not hungry after school, and their parents can work and not worry about the kids,” said Casso.

Though these free meals bring some practical help to the lower-income families, they do not mitigate the emotional pressure of being unable to provide the family with enough food.

“I wish I had a better job, so my kids and I could live without anyone’s help,” said Stevens.

Not only in Texas, but also in the entire country, lower-income households need to find jobs that will help them get out of poverty.

“The government is giving fish,” said James Winans, chief development officer at Bowery Mission, a program in New York City that provides food and shelter for the needy.
“But is should give the people the opportunity to fish.”