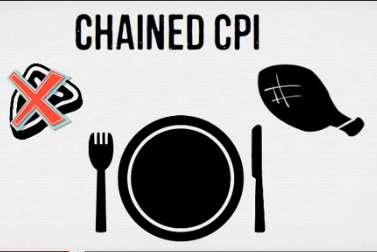 The future of Social Security is at a tipping point for recipients and the nation. A proposal to curtail future benefit increases could save the country $340 billion over the next decade, but it could also cost some people $30 a month as the effects take hold. It doesn’t sound like much, but the reduced benefits could become a burden to retirees.

“It’s chump change compared to other things, but it’s not chump change to people who are getting social security and living off it,” said Monique Morrissey, an economist at the Economic Policy Institute.

Jim Sullivan, 57, has been receiving $2,300 a month for the last year as part of the Social Security disability program. He receives the maximum amount allowed, but said he had never planned to live off only Social Security benefits. He also receives other income from private contracts and savings.

“Social Security, everybody knows, was never intended to be a complete retirement plan, at least anybody with half a brain over the last 25 years,” said Sullivan, a former CPA who lives outside of Atlanta, GA. “It’s not a lot. You have to have something else or live within your means.”

But, the income is especially important as he prepares for lung-transplant surgery. Every dollar increase in healthcare will come out of his pocket – and his disability payments should reflect the same growth in prices he faces.

The rising cost of healthcare is the primary reason why seniors face price increases that are higher than most consumers. An experimental inflation measure for the elderly exists which takes this into account. It is called the CPI-E and has been tracked by the Bureau of Labor Statistics for the past 31 years. The CPI-E rose 0.55 percentage points faster than the chained CPI on average, according to the BLS. This means that switching to the chained inflation index reduces real benefits more than most analysts calculate.

“They are trying to paint this as a more accurate index of inflation for the broader population, if anything it understates inflation for seniors,” said Morrissey. “While chaining can be more accurate, this particular measurement doesn’t take into account healthcare costs seniors face.”

The chained CPI is often considered a more accurate measure of inflation for the average consumer and is the primary argument proponents put forward for the change. This is because the chained CPI accounts for consumers’ ability to substitute cheaper products when another item gets too expensive. For example, if the cost of apples rises quickly, a shopper may choose to buy less expensive bananas. This is referred to as the “substitution bias” and accounts for the difference in the two inflation measurements.

The index change was an attempt on the part of the White House to reach a bipartisan agreement, but both sides of the political spectrum have voiced outrage, labeling the policy as an overt benefit cut.

“For Social Security, that policy change would not alter the size of people’s benefits when they are first eligible, either now or in the future,” said Jeffrey Kling, associate director for economic analysis at the Congressional Budget Office, in his written testimony to Congress. “But it would reduce their benefits in subsequent years because of the reduction in the average COLA.”

To be sure, the move to the chained CPI is estimated to save the government $340 billion over ten years and will extend Social Security solvency by 75 years, according to a report by the Congressional Budget Office. But, these numbers may be overstated. The gap between the chained CPI and the traditional measurement has narrowed over the past five years. From 2006 to 2009, the difference between the two measurements was 0.15 percent – that dropped to 0.11 percent over the past two years. This means that the benefit to the federal deficit and Social Security may not be as great as many assume. Meanwhile, seniors will bear the brunt of the costs.

“It does cut benefits. Not enough to make Social Security solvent for 75 years but enough to hurt,” said Morrissey. “You could make the problem go away with other methods. You shouldn’t do it through cuts at all.”

Other more effective methods to improve Social Security solvency, such as raising the cap on tenable earnings, would extend the lifespan of the Social Security trust fund for longer without taking money away from current and future recipients. Adjusting the cost of living index does not amount to effective long-term protection for Social Security. It is a band-aid on a gaping wound.

Meanwhile, seniors like Sullivan will struggle to live within their means as Social Security benefits fail to keep up with the real price increases they face – and the future of Social Security will continue to hang in the balance.