Shoe-repair industry about to lose half of its businesses 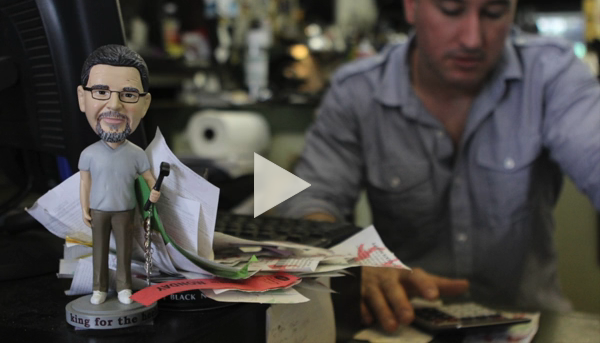 Only 15 years ago, 60,000 repair shops nationwide refurbished shoes and repaired other leather products. Today, only 7,000 remain in business despite a recession, which caused consumers to watch every penny. The future is no brighter. America is heading toward losing half of its surviving repair businesses.

The decline is the result of a vast influx of cheap footwear from abroad that makes it cheaper to replace shoes than to repair them. That’s great for consumers, but repair shops and the people who work for them have been a collateral damage.

The anemic economic growth and cheap imports are going to cost America an additional 1,700 jobs in the shoe and leather-repair industry in the next 7 years, according to the Bureau of Labor Statistics. China, Vietnam and Indonesia produced almost 99 percent of all footwear sold in the United States last year, according to the ShoeStats report, released by American Apparel and Footwear Association. China, the biggest U.S. trading partner, accounts for 85 percent of all footwear imports. The average import price of China-made shoes was a little less than $10 a pair, which meant the U.S. footwear market has been drowning in extremely cheap shoes. This affected all industries, including domestic manufacturers, who had to fight to stay competitive on the market by lowering their products’ costs.

Lower is the Consumer Price Index showing footwear price changes for urban consumers during last 16 years. The data is released by U.S. Department of Labor.

On average, every American in the United States, spent $212 on more than seven pairs of shoes in 2011, according to the ShoeStats report. That means each person spent less than $30 a pair at that time.

Healthy market competition, a vast variety of goods and constantly dropping prices look like a positive trend for consumers, but not everything is what it seems.

Price wars pushed manufacturers to use cheap materials that affected quality. Those shoes break fast and cannot be fixed.

“We bet on better quality,” said Lana Domadov, co-owner of a Simon’s shoe repair shop in New York City. “But sometimes people bring shoes that cannot be repaired because of their initially poor quality.”

The new market for cheap apparel and footwear posed major difficulties for repair businesses. People who worked in that industry found themselves struggling or out of work because fewer people wanted to fix their shoes. It became easier and cheaper to buy a new pair than to fix an old one.

The median price of pair of women’s high-heel shoes in Rainbow, a mid-range American retail chain, is around $25. When repair services like replacing high heels dowels and adding protective soles can cost anywhere from $28 to $50, depending on difficulty.

Domadov and her husband, Simon, immigrated to New York City from Uzbekistan in 2000 and bought a shoe-repair shop from a previous owner. She said the repair business 13 years ago was twice as profitable. Now their store has had to come up with additional services to stay in business. Besides repairs and shoeshines, they started to make duplicate keys, take passport pictures and sell batteries. But the shop’s lifesaver is a group of permanent clients who picked their shoe repair shop over dozens of others in New York, even another one on the same block.

To compete with low manufacturing prices and stay afloat in the tough U.S. economy, Domadov, like many other repair business owners, had to adapt.
Her workers have started providing individually tailored orthopedic services, something consumers couldn’t get from a retail store.

“We have a customer who has a problem with his feet because they are different lengths,” Domadov said. “He brings us all of his footwear.”

She said people mostly tend to bring very expensive shoes for care services, or shoes with which they connect emotions and memories.

“What would lead me to fix a pair of shoes is an emotional attachment, like if I just love it or if I can’t find it anywhere else,” said Patricia Dygert, 24, a student at New York University. “I would get it fixed instead of getting rid of it.”

She said her generation finds shoe repair a hassle.

“If something breaks, fixing feels like already a hand-me-down, because when you buy something, there is already a new style,” Dygert added. “And you always want new things.”

Rep. Lynn Jenkins, a Kansas Republican introduced the Affordable Footwear Act in the U.S. House of Representatives in July 2011. The bill argued that each pair of shoes imported into the United States is “hit with a hidden tax” that goes up to 40 percent. Her bill calls for dropping this tax, saving American consumers upwards of $2.4 billion annually at retail outlets. If the bill is enacted, the price of a $10 pair of children’s canvas sneakers, for example, would drop by $3, according to the Footwear Distributors and Retailers of America. Footwear prices would drop by a third, which would certainly have a negative impact on repair businesses.

Modern shoe repair shops tend to cluster in big cities like New York because people who live there can afford to buy expensive footwear or spend money on extra protective or orthopedic work. Outside the city, things are much tougher.

“I remember when I used to live in Virginia Beach, I asked my friends where I could change my heel tips dowels,” said Julia Voloshenko, an interior designer. “And they all told me that it is easier to buy a new pair because the closest repair shop was very far away and cost a third of shoes’ price.”

Giovanni D’Italia Shoe Repair is the only repair shop in Hoboken, New Jersey. The store was open 50 years ago by an italian immigrant Giovanni Perrupato. Today, his grandson Vincent Perrupato is in charge of the family business.