RV Sales are Up, but Dealers Remain Wary 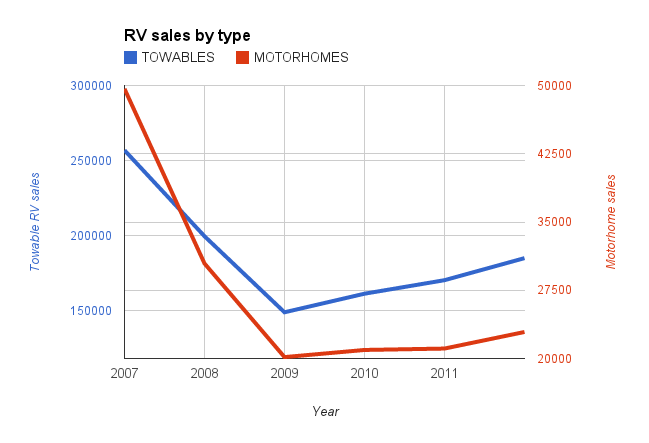 Fred Lemke’s RV dealership in Sacramento is doing brisk business, a noticeable improvement over last year and a relief after what Lemke said is the worst recession he’s seen in his four decades in the business.

Lemke had $35 million in sales last year on his six and a half acre lot.  But the California dealer said he’s wary of hiring new full-time employees because he isn’t sure how strong the economic recovery actually is.

“I’m not big on spending money on things that won’t have a good return,” he said.

From rising household wealth to growing RV rentals, there are signs that the economy is recovering from the economic downturn and that RV sales will continue increasing.  But dealers are approaching these signs apprehensively.  Like many other business owners, they are holding back on expanding and hiring because they aren’t sure if they’ve found an oasis or a mirage.

During the economic downturn many dealers had to sharply cut their costs, as their typically middle class consumers shied away from major purchases.  Sales nationwide fell to 169,000 vehicles in 2009 from 306,000 in 2007, a roughly 45 percent drop, according to data from Statistical Surveys.  The average price of an RV is $37,000, though they can be bought for as little as $6,000 or for as much as a million.

“This is really a discretionary purchase that people can postpone if they are worried about the future,” said Richard Curtin, director of consumer surveys at the Survey Research Center, University of Michigan.

Jim McCalpin, owner of Grand Am RV in Mastic Beach, NY, said that his sales went off a cliff during the recession, and that he survived only by cutting his inventory from 250 vehicles in 2008 to 30 today, by consolidating into a smaller 1.3 acre lot and by reducing his staff from 20 to 5, including himself and his wife.  If he hadn’t made the cuts, he said, “we would have been out of business.”

McCalpin said that things are much better today, as he has seen more customers come in to buy new RVs.  National sales figures tell a similar story; about 207,000 new RVs were sold in 2012, an eight percent increase over 2011 and a 23 percent increase over the low point of 2009, according to data from Statistical Surveys.  And there are signs that the upward trend will continue.

Curtin, the economist, said that new RV buyers tend to be older people whose equity was hurt by the housing market. As the economy recovers, these consumers have seen the value of their homes rise again after having fallen sharply during the downturn. Curtin said that sales of new RVs are expected to go up again this year, and that the trend would continue if household wealth continues to grow.

The net worth of American households – the difference between the value of their assets, such as their home, and their liabilities, which includes mortgage debt – rose at the end of the fourth quarter of 2012 to about $66 trillion, according to the most recent data from the Federal Reserve.  This is the highest it has been since the third quarter of 2007, prior to the recession.  The increase was largely driven by rising home prices, as the value of real estate owned by American households grew by about $480 billion in the fourth quarter of 2012.

There are other signs that sales will continue to trend upward.  El Monte RV, a national rental chain, has seen its business increase among both domestic and international customers.  Domestic rentals were up between 20 and 30 percent by mid-April over the previous year, said Joe Liang, director of marketing.

“All around we’re seeing increased interest,” Liang said, noting that the company had recently added two new locations in Houston and Orlando to meet demand in those markets.  Liang also said that there is a correlation between renters and first-time RV buyers.

“Most people who rent aren’t ready to buy.  It’s kind of an entry point, so that they can get familiar with the product,” he said.

Dealers, however, are still approaching these signs gingerly.

“Part of me says we should expand,” said McCalpin, 63.  But having reached this point with a leaner staff, McCalpin, who’s been in business for 35 years, said he doesn’t want to take any more risks at his age.

In California sales have also rebounded, improving about 8 percent in 2012 over 2011 according to Troy Padgett, owner of All Central RV and president of the California Recreational Vehicle Dealers Association.   Padgett said that dealers, including himself and his partner, remain cautious about expanding.

Lemke, the Sacramento dealer, said that he would add a few seasonal employees this summer to deal with the extra work he is anticipating, but no full-time employees.  He also said that it isn’t just the dealers who’ve changed.  “It’s a different customer, and they are a lot more cautious,” he said, noting that the buyers take more time before purchasing a new RV.

There are few dealers who are expanding, but in new ways.

Bill Hawley, owner of Hawleywood RV Range, said he survived the economic downturn by cutting back on inventory and advertising, and by aggressively pursuing Internet sales.  The Kansas City dealer is now selling units to people as far away as New York and Canada, and Hawley said he might even add one or two new service employees later this year to help with the increasing business on his seven-acre lot.

If nationwide sales keep going up, other RV dealers may have no choice but to hire extra hands to deal with the increasing workload. But for the moment, they continue holding back, unsure if the customers will keep rolling in to buy new RVs.

“We’ve been dealing with the unknown for four years.  It’d be nice to deal with the known,” said Lemke.

Who owns an RV? | Create infographics