As a result, retail sales rose 1.1 percent in February, according to a report released Wednesday by the Department of Commerce, a stark contrast to January’s moribund 0.2 percent growth.

Gas stations were the biggest benefactor of consumer spending, enjoying a 5 percent increase in sales due to higher gas prices. Shoppers also spent more on building supplies and groceries.

As consumers continue to feel the pinch of higher gas prices, inevitably they cut back on discretionary spending.

“Gas prices have been horrendous,” said Casey Johnson, 40, of Perth Amboy, N.J. who works for the Perth Amboy school district. “We don’t go out nearly as much, our extra money has to go into the gas tank.”

“Consumer Confidence rebounded in February as the shock effect caused by the fiscal cliff uncertainty and payroll tax cuts appears to have abated,” said Lynn Franco, Director of Economic Indicators at The Conference Board in a press release “Income expectations, which had turned rather negative last month, have improved modestly.” 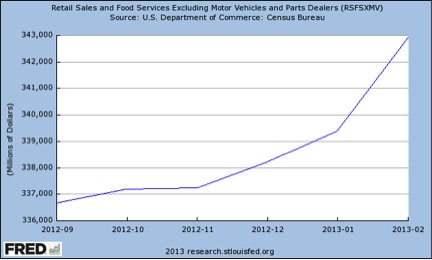 According to the chart, retail sales have steadily improved since September 2012.

However February’s sharp growth in sales was not spread evenly across the different retail sectors. Electronics, sporting goods, department stores as well as restaurants saw a decrease in sales.

“Spending on dining out has dropped for two consecutive months and in February grew at the slowest year-on-year rate since January 2010,” said Ellen Zenter, senior economist at Nomura Securities in New York. “So clearly there are some households cutting that out of the budget, dining out is highly discretionary.”

Darden Restaurants Inc., the parent company of Red Lobster, Olive Garden, Longhorn Steakhouse, and Capital Grille conceded there were “economic headwinds” that have contributed to the decline in consumer spending in a February 22, 2013 press release.

“Increased payroll taxes and rising gasoline prices, which together put meaningful pressure on the discretionary purchasing power of our guests,” said Clarence Otis, Chairman and Chief Executive Officer of Darden. “We recognize there is still more to do to further address affordability and to improve other important aspects of the guest experiences we provide.” 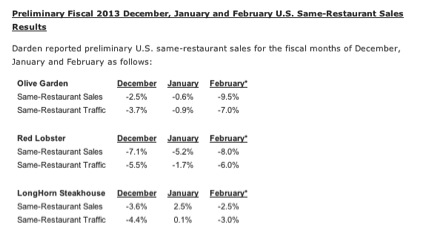 Good news in the labor market, and the recent gains on Wall Street have caused many to cheer, however there is evidence that the consumer is not prepared to return to pre-recession spending levels.

Desiree Davila, 32, a resident of Woodbridge, N.J., was unemployed for a full year before finding a job in a doctor’s office, although she now has a steady income she does not spend money the way she used to.

“Now that I am employed we go out a little more than we used to,” said Davila  “We try to keep more money at home now.”

As consumer confidence continues to rise, February’s sales numbers show glimmers of hope for the broader economy. The sharp increase in February’s retail sales number is certainly positive, however there are signs that consumers, like Davila, are reticent to let go of money saving habits acquired during the recession.

“Even though I have a job now, I still spend money as if I don’t have it.”