Exports are helping the U.S. economy recover but are not likely to save it.

A sharp narrowing of the trade deficit in December led economists to believe that declining oil imports and a surge in exports were compelling the U.S. economy to expand more than anticipated. January’s numbers leveled out some of those gains.

Imports of goods and services outnumbered exports by $44.4 billion, the latest Commerce Department data showed. The United States has had a growing trade deficit—a shortfall that occurs when a country imports far more than it exports—since the mid-1980s.

“This isn’t like it suddenly widened well above what we’ve seen before,” said Stuart Hoffman, senior vice president/chief economist at PNC Financial Services. “Quite the contrary it’s right back in the middle of the trend.”

U.S. exports are currently 14% of GDP—the highest they’ve ever been. Part of the reason is that other parts of the economy haven’t done well. But exports have also had a helping hand from the Federal Reserve, which has kept the dollar soft by keeping interest rates low.

“The Fed is helping,” said Standard & Poor’s economist Beth Ann Bovino. “But that help is being offset by investment in U.S. treasuries from Europe as they grapple with their sovereign debt crisis.”

To many Europeans, U.S. Government bonds are a safe haven. But foreign investment makes the dollar stronger by pushing down treasury yields and counterbalances efforts by the Fed.

While the Eurozone slowdown is having an impact on the U.S. economy, Washington appears to be another drag.  Consumers are not doing as well as they could be because of the recent tax hike. The strengthening housing and labor markets and low debt levels support spending but government paralysis could change all that.

Bovino sees the long-term trend in energy as a key buffer. “Real exports of energy are not going away anytime soon,” she said.

US production of natural gas is making prices cheaper providing a fresh competitive edge. As a result, manufacturing has done well. The U.S. is more aggressive than it was several years ago—labor costs are down compared to Canada said Krishen Rangasamy, senior economist at the National Bank of Canada in Montreal.

“Industrial supplies in particular showed weakness,” he said in an email.  “This was enough to offset increases in other categories. So, the weakness in exports in January wasn’t something that was broad-based.”

If sequestration cuts are reversed in the next few weeks as some economists predict, the overall trend looks good for a narrower gap in the months ahead. 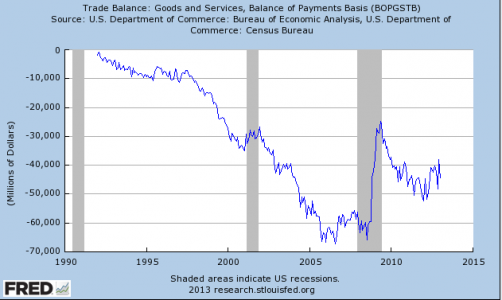