Service sector grows at fastest pace in a year

The U.S. service sector grew in February at its fastest rate in the last 12 months, despite the impact of the fiscal debate in Washington.

The non-manufacturing index of the Institute for Supply Management rose to 56 from 52.2 in January, beating market projections for a modest decline to 55. A reading above 50 indicates expansion in the sector, which makes up more than 85% of the country’s economy. February was the 38th consecutive month that the index expanded. 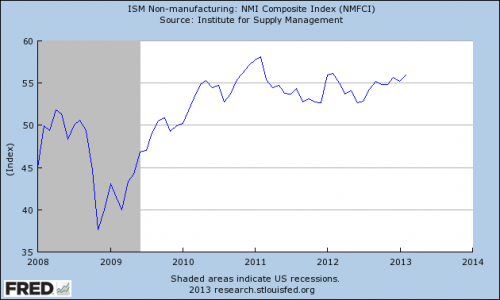 Thirteen of the 18 industries tracked by the survey reported growth, but the index clearly reflected the sharp increase in new orders. The sub-index jumped 3.8 points, to 58.2 from 54.4 in January, as consumers appear more confident that the recession is over and are willing to spend more in new lines of products released in the market the previous months.

“That’s about the future. Today’s output is tomorrow’s future,” said First Trust Portfolio’s chief economist Brian Wesbury. “The increase in new orders is a testament that the economy will continue to grow.”

The exports index recorded considerable gains as well, rising to 60.5 – its highest level since 2007 –, in anticipation of a free trade pact negotiated between the U.S. and the European Union.

Those figures followed last week’s strong performance of the ISM’s manufacturing index, which accelerated to its fastest pace since June 2011.

Construction also picked up as low borrowing costs and high rents have driven demand back into the housing market. According to the Department of Commerce, new home sales hit a 4,5-year high last January.

“The next few months are going to be all about construction,” said Ryan Sweet, a senior economist with Moody’s analytics. “The housing market shows at last signs of acceleration.”

Yet without the budget gridlock in Washington, employment could have risen to even higher records as the economy continue to expand and new orders rise.

“The economy is more vulnerable after the fiscal debate,” said Sweet, who also noted the negative impact of the higher payroll taxes.

Overall, the growth in the measure suggests that consumers are spending more and companies expect Americans to keep spending.

“Because of the sequester, a temporary hit is possible, but nothing permanent,” said Wesbury of First Trust Portfolio.

“The service sector is the largest in the US. The ISM report clearly suggests that the economy will keep growing,” he added. “I don’t see a recession in 2013.”