Home prices climbed last year to their highest annual point since the bubble.

The Case-Shiller 20-city index, released on Tuesday by S&P Dow Jones Indices showed that the value of residential real estate rose 6.8 percent in December comparing to the previous year.

“It is the biggest yearly gain that we had in several years,” said Nathaniel Karp, chief economist for BBVA Compass.  “The biggest jump since 2006.”

Recovery in the labor market, low interest rates, a tight housing supply  and the new residential sales growth — 19.9 percent above the 2011 figure, according to the U.S. Census Bureau — contributed to the biggest rise in home prices since June 2006.

In addition, the number of building permits increased 30.3 percent from the previous year’s figures, indicating the growth in demand for homes.  Economists explain that despite the number of “underwater” mortgages (the value of the house is less then the amount owed) and stricter mortgage regulations, the residential housing market shows signs of sustainable improvement. Private investors have become more confident and started entering the market. 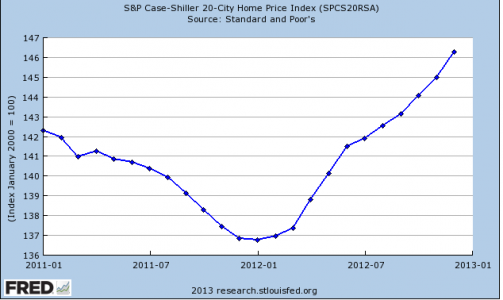 “The consecutive price growth provides the assurance, confidence, to the average household that the recovery is real, even if it is moderate,” said Karp. “We start seeing the light at the end of the tunnel for some of the cities.”

“Sales haven’t been progressing because getting a mortgage is difficult,” said Lwane Shivachi, a real estate associate at the Level Group in New York. “Home prices are going down a little bit, but the market is strong.”

Real estate is a very local market, constrained by local conditions and different trends across the nation, but economists predict that overall home prices will continue rising in 2013 regardless of the expiration of the payroll tax cut, additional taxation for wealthiest or the upcoming sequester.

“It should affect growth in the first part of the year,” said Thomas Julien, an economist at Natixis North America LLC. ”It will affect the household a bit but won’t reverse the improving trend.”

Feroli said he expected prices to increase by 4 percent in 2013.