Durable Goods Orders Down for January

Orders for durable goods slumped in January, pulled down by big drops in defense spending and aircraft orders, but there are encouraging signs that business spending is starting to pick up amid the sluggish economic recovery.

Overall, durable goods orders dropped 5.2 percent in January, slightly more than forecast. The January decline ended a streak of four straight months that the indicator of manufacturing activity had risen, according to data issued Wednesday by the Commerce Department.

Economists said the sizable decrease was driven by a precipitous fall in defense spending and a significant fall off in orders for planes, two notoriously volatile parts of the durable goods report. After rising 107 percent between November and December, orders for defense capital goods were down 69.5 percent between December and January – and the sharp drop pulled down the overall durable goods number, obscuring some bright spots in the data.

“It’s a big drop, but when you strip away some of the volatile components it’s not nearly such a weak report,” said Tim Quinlan, an economist with Wells Fargo.

Without the defense and airline cuts, orders for core durable goods were up 1.9 percent in January, the largest increase of its kind in more than two years. And by that measure, durable good orders were up for the fifth straight month. Quinlan said the streak is noteworthy, but pointed out that durable good orders were down for four out of five months between May and August of last year. He said the increases in recent months were, in part, a result of the bar having been set low by previous declines.

“I wouldn’t point to that and say all is well,” Quinlan said. “I don’t think that’s where we are right now. There was a lot of weakness in this (data) series as the year started.” 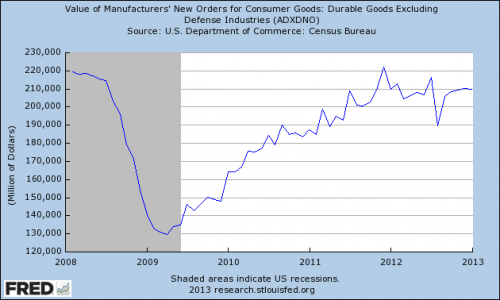 The durable goods report is considered a key gauge of manufacturing activity and measures purchases of big-ticket items that are expected to last at least three years, things like furniture, appliances, machinery and cars.

Like Quinlan, Thomas Simons, a money market economist at Jefferies and Company, said the durable goods report contained data that indicated businesses were starting to increase their spending. Orders for machinery climbed 13.5 percent in January and Simons said the improving housing market might be driving orders for construction equipment and home appliances. He pointed out that that durable goods orders rose 6.3 percent when defense and aircraft purchases were stripped away from the January data.

“I think it reflects pent up demand,” Simons said. “We think that’s going to accelerate as we get some more clarity on fiscal policy.”

When, or if, that clarity will come is another question. Simons and Quinlan both said the ongoing political wrangling in Congress over the forced spending cuts set to go into effect Friday was hurting the business climate, creating uncertainty that was preventing companies from making significant investments in equipment. They said a comprehensive fiscal deal would likely spur a rise in business spending. But Quinlan wasn’t holding his breath for sweeping action in Washington, D.C.