U.S. consumer prices were flat in January but the effect is likely to be short-lived.

The Consumer Price Index, the government’s key measure of inflation, was unchanged since December, as reported Thursday by the Labor Department. This is slightly below economists’ estimates of 0.1 percent. Over the past 12 months through January, prices have increased 1.6 percent.

Dropping gas and food prices offset the rising costs of other items, such as clothing and medical care. Excluding energy and food costs, which can both fluctuate widely, shows that prices are growing in other categories. That measure, called core CPI,
rose 0.3 percent in January alone, and is up 1.9 percent compared to a year earlier.

But, consumers are feeling a different effect after 37 straight days of rising gas prices.

“People will be spending more at the pump. Tack that onto the payroll increase and the typical consumer is seeing the pinch,” said Scott Brown, chief economist of Raymond James and Associates.

Gas prices have been rising nationwide and are up 45 cents since January. The national average of a gallon of regular, unleaded gas rose to $3.78 on Thursday. Hawaii, New York and California are facing prices over $4 a gallon.

This trend is expected to continue through the early spring, slowing down as the summer starts – a pattern that historically happens each year when refiners close for maintenance and transition to more expensive summer blends. 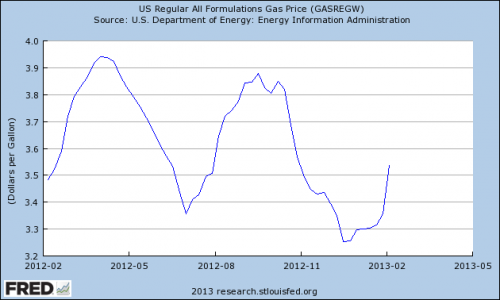 “It’s really a short term phenomenon, we don’t expect prices to go up and up and up,” said Brown.

While consumers are paying more to fill up their cars, they will see falling prices on the shelves as spring retail discounts are anticipated.

Brown says that clothing prices remained higher over the past month due to fewer retailer discounts. This also may have contributed to the weak retail sales report last week. As spring merchandise hits the shelves in coming weeks, retailer promotions are expected to grow.

“I think there will be a lot of push back on the clothing. People are restocking for the spring and the sales on apparel are going to be coming back,” said Peter Morici, professor of economic policy at the University of Maryland.

Morici says now is the time to start shopping for your spring cardigans. Though, it may help to avoid the pump and shop online.