Retail sales growth in January proved to be anemic as consumers were squeezed by higher gas prices and rising taxes resulting in a cutback in spending.

Retail sales for January increased only 0.1 percent, a decline from the 0.5 percent increases saw in both November and December, according to figures released Wednesday by The Department of Commerce.

Rising gas prices, the expiration of the payroll tax cut, which expired in January, and tax increases for individuals making over $400,000 contributed to the decline in consumer spending.

Motor vehicle sales dropped, as well as furniture sales. However, not every part of the retail industry declined in January. Department store sales declined 0.7 percent from the previous month, however not all department stores suffered a loss. Macy’s, according to its February 7th press release, announced “same-store sales were up 11.7 percent in January as compared to January 2012.”

Junior Economist, Kim Frasier of BBVA Compass views the expiration of the payroll tax cut, combined the tax increase on individuals making over $400,000 a year indicating slow growth as a harbinger for the months to come. “The hit to disposable income will continue to show in the coming months,” said Frasier. “The consumers are dealing with economic headwinds.”

In the chart below shows total retail sales (excluding food services) from the Federal Reserve Bank of ST. Louis, for the year’s 2007-present day. 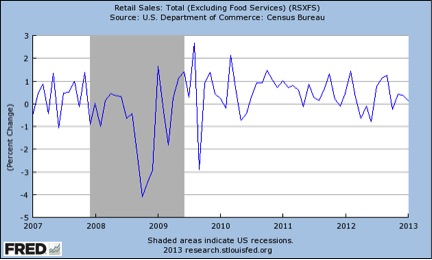 Nikia Westbrook, 24, NJ, has significantly cut spending in her household spending, and does not see any changes in the near future.  Westbrook lost her full time job eight months ago, she has only been able to find part-time work.

“I’ve had to cut back,” said Westbrook.  “I don’t really go to the mall that much anymore, whenever I need to run out and get something quick I run to the dollar store.”

The strain on consumers could translate to continued slow economic growth.

Economist Hugh Johnson believes the downward pressure the consumer is under may not bode well for retailers.  “We could have a decline in consumption in the first quarter,” said Johnson. “This is not a good start for the first quarter.”