Unemployed Are Optimistic And Willing To Lower Expectations

As unemployment becomes lower many unemployed people say they are optimistic that the economy will return back to normal. Though the unemployed may become more motivated to seek jobs, economic reports show that many of the New York City and New York State sectors adding jobs are lower-paying, such as food services, social assistance and nursing.

Numbers released by the New York State Department of Labor show the most job gains are expected in food services, followed by health care services, administrative work, professional and social assistance sectors. Nursing is a close seventh to social assistance and educational services trails behind.

The New York City Independent Budget Office’s report, “City Adding Jobs Despite Wall Street Weakness,” shows a similar trend in city hiring, with the exception of more jobs added in leisure and hospitality and retail trade than throughout the state. High-paying sectors like the securities industry are not faring as well.

Jesse Rothstein, professor of economics at Stanford University, said this recession is different from other recessions that have hit only low skill workers. The good news, Rothstein says, is that painful layoffs are only reflective of the recession not longer-term structural problems within the U.S. economy.

The psychological effect of recent job numbers, however, could spur more employers to hire and generate activity among the long term unemployed.

“It probably will have an effect. There is no demand because they think no one is hiring but if we could promise that to employers they would more likely to hire because they know the demand is there,” Rothstein said.

Pennie Getman, Manager of Lewis County Employment and Training, in upstate New York, said people are becoming more successful at finding jobs, but they are adjusting their expectations and accepting modest to low-paying jobs.

Maritere Arce, a spokeswoman for the New York State Department of Labor, said the Manhattan office is using research to help the unemployed understand which types of careers are no longer hotbeds for hiring.  For example, Arce said graphic design is a popular area of study but employers are not seeking many graphic designers.

Arce said she has seen a wide range of unemployed clients come into the Manhattan unemployment office, including Wall Street traders and people with doctorate degrees.

The Department of Labor’s Brooklyn unemployment office and job training center on Schermerhorn Street provides enough space for 30 or more people to search for work. The room is almost dead quiet with the exception of a few clients who call out to a supervisor for help formatting their resumes.

Lorenzo Lawrence, 41, said he has been looking for work for a year. He lost his job as a bouncer after his club was shut down. He decided to move back to his place of birth, Brooklyn, to stay with friends and eventually find work. He has not filed for unemployment yet.

Though he has not received any calls for interviews, Lawrence said he remains very hopeful that the economy will recover and said he believes he will find a job soon.

“I am extremely optimistic,” Lawrence said. “I’ve always worked. With an improving economy we have to rebuild and get refocused but I know I will find something in the next two weeks.”

Lawrence said he has been paying close attention to the unemployment rate.

Danielle Miller, 26, said she searches every day to find work in a wide range of job sectors such as security, retail stores or child care. Miller, who used to work at the Parks Department, said child care is not ideal but she is looking everywhere.

“Even though it’s a very slow recovery, it is getting back to where it used to be,” Miller said. 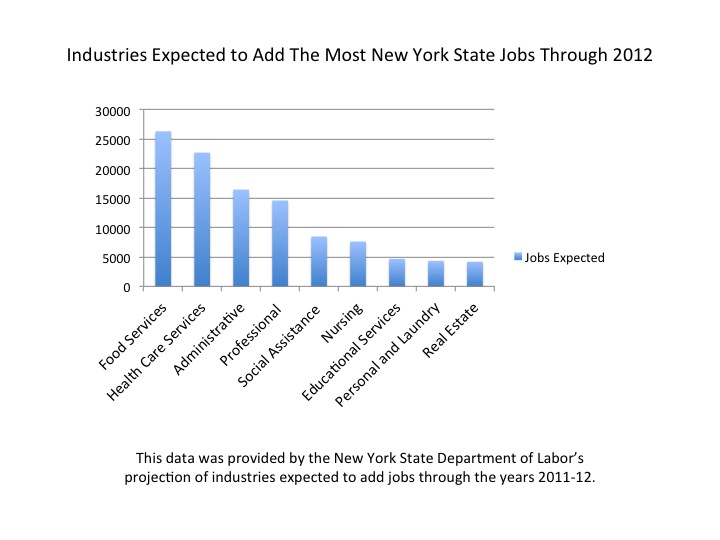