Americans embrace smartphones as a necessity rather than a luxury 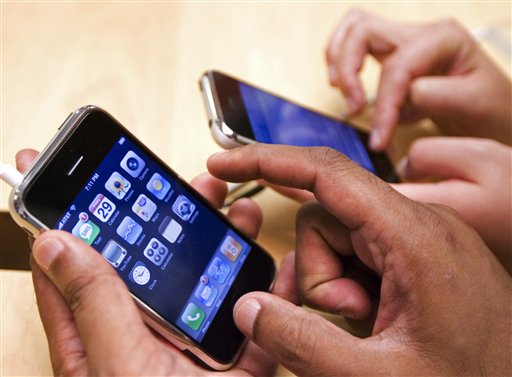 Nare Ratnapala, front, and Jia Jiang, explore the features of the Apple iPhone, as they wait at an Apple store in Tysons Corner, Va., Friday, June 29, 2007. (AP Photo/Manuel Balce Ceneta)

Smartphone use on the rise by mpylayev

Young, tech-savvy American consumers have paved the way for rapid growth in smartphone use, de-elevating the internet capable, data-consuming devices from luxury to basic necessity.

Nearly half of American adults own a smartphone today, a figure that jumped 11 percent since last May, when only 35 percent of Americans reported owning one, according to the Pew Research Center. The number of smartphone users have since surpassed those with basic cell phones, who now account for just two in five Americans overall.

Almost half of consumers between the ages of 18 and 34 who make $15,000 or less a year have a smartphone device, according to a Nielsen survey. And consumers across the board who have the service are increasingly unwilling to give it up.

“Now that I have a smartphone I can completely interact with my inbox the same way that I can from my computer and it’s changed my life—I have to have it,” said Matthew Sanders, a Brooklynite with several jobs. “I couldn’t imagine living without it now.”

Sanders, 27, falls within the age bracket of people most likely to have a smartphone. As of January, 66 percent of Americans between the ages of 25 and 34 reported having one—and four in five gave in to the trend in the last three months. 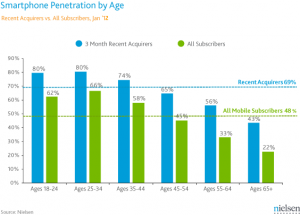 Dr. Jason Young, a behavioral psychologist at Hunter College, is studying this drift: “This goes hand in hand with internet access. The truth is how many people have a color television, which used to be a luxury, and how many have air conditioners, which also used to be a luxury?”

The internet economy is growing rapidly and is projected by Boston Consulting Group to reach $4.2 trillion in 2016. BCG predicts that that almost half of the world’s population will be online by 2016 and forecasts that four in five broadband connections will come from mobile devices, such as smartphones and tablets.

As the smartphone moves toward becoming a requisite for modern living, some embrace it while others give in reluctantly.

Linda Thach opened Little Skips, a Brooklyn café, two years ago and found that she owed much of her increased efficiency to her phone. “I really don’t like to have to use this so much but I’m coming to terms with it,” she said, looking down at her iPhone 4. “It’s helping me organize my life.”

Thach, 31, uses the phone to create employee schedules, order supplies and stay on top of her ever-growing to-do list. “If I had to pick up something in the city for the café, like if the coffeepot breaks, my phone reminds me to get another coffeepot,” she said. 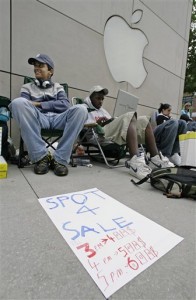 One in five cell phone users overall have an iPhone. The Apple device’s sales have nearly doubled since May 2011, surpassing the growth of its competitors, Google’s Android and RIM’s Blackberry. But a mid-range monthly plan with AT&T that includes 900 minutes, unlimited text messaging and three gigabytes of data adds up to $109.99 before taxes. Sprint’s version of the plan is about $10 cheaper, while Verizon’s is a somewhat more expensive. But how are Americans, especially those making $15,000 or less, able to afford these plans?

Consumers are flocking to discount outlets in greater numbers this year, according to a BrandSpark International survey. Of over 100,000 households surveyed, 30 percent of respondents said they shopped at superstores more often this year and 20 percent said they were more likely to sift through discount store shelves. Nearly half said they shopped at gourmet and specialty stores less often.

If faced with the possibility of having to get rid of her phone, Thach said she would scale back on food and utility costs before she would shut off her phone service. “I would cook more things at home, buy more things in bulk—and definitely cut down on electricity.” she said. 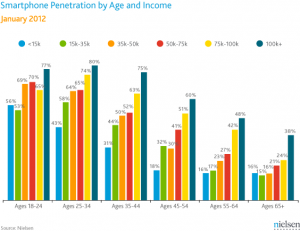 The average monthly smartphone bill is $110 dollars compared to just $60 for a basic one, according to Centris’ Insights. It is possible that people are learning to be more resourceful by shopping for discounted and generic items, but there are also many low-cost service options out there. T-Mobile offers a two-year $49.99 a month contract for an unlimited data plan—if at least two lines are opened. Individuals can also opt for pay-as-you-go plans with companies like Boost Mobile and Metro PCS, whose highest tier plan is $60 a month. Boost Mobile offers an unlimited talk and text plan that is based on shrinking payments—bills that decrease the longer service is maintained—that can start at $45 and fall to $30 after a year and a half. Although they have to be purchased separately, smartphones work with all of these plans.

Michael Barnett, a 26-year-old legal assistant at a Long Island law firm, still uses the Samsung flip phone he bought in 2004 and hasn’t felt the need to upgrade since.

“Sometimes it is difficult because people will ask if I got an email and I will not be near a computer so I can’t reply… but it’s never really anything important,” Barnett admitted.

Barnett gets by without other modern conveniences like Google Maps and GPS. “I have a printed out subway map that I carry on me,” he said, laughing. “I’m a dinosaur.”

But many Americans, particularly those who have already attached themselves to their beloved devices, would be hard-pressed to disconnect—even if they had difficulty affording it.

“My phone would be one of the last things to go,” said Sanders. “Because it would help me, even if I was looking on Craigslist all day for jobs.”