Bronx based attorney Dwayne Lloyd Samuel says that he feels like a prisoner in his own home. In 2007 he bought his co-op apartment, overlooking Yankee Stadium at the top of the market.  After putting close to $60k into renovations, he now struggles to make his monthly payments.

He would gladly sell, but even today it would be at a significant loss.

“I feel that I’m being blamed for all of the abuses and the greed,” he said. “I put down my 20 percent cash. I fixed up my place and they are telling me I’m going to be out 50k? It’s crazy.

Mr. Samuel’s situation is an example of a crisis that face sellers in today’s marketplace.  Prices in the Northeast are down 1.9 percent since last year. Sales are also down 3.3 percent for the month February, according to the the National Association of Realtors.

Large amounts foreclosures and short sale properties continue to keep prices down, making it nearly impossible for sellers to get out from under water without taking significant financial hits.

Mr. Samuel however is one of the lucky ones. He plans to convert his dining room into a third bedroom and rent his entire apartment out until the market improves.

His location near Yankee Stadium affords him that luxury. But for many of his Bronx neighbors even a stones throw away, this is much harder to pull off.

One in 7 residential mortgages are in foreclosure in The Bronx, which along with Brooklyn has the highest rate in the city according to the Federal Reserve Bank of New York

Zip code 10474, which covers Hunts Point, is a ground zero of sorts.  Foreclosures there stand at 20 percent, with another 7 percent more than 90 days delinquent, the highest in the borough. 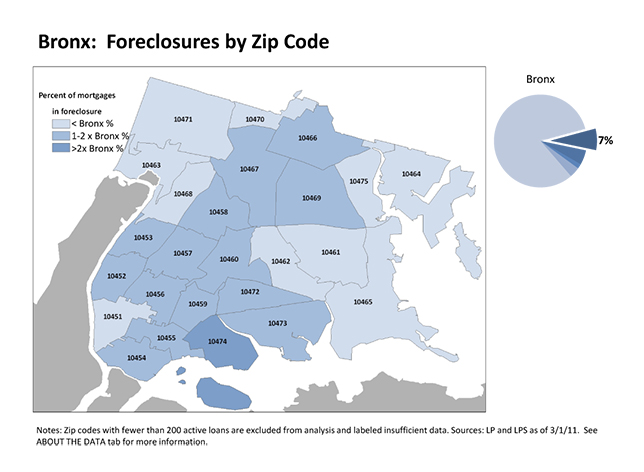 Strangely enough, many of the distressed houses in 10474 are multi-family properties, where owners have the option of paying off their mortgages through rents.

But unlike zip code 10452 where Mr. Samuel lives and has multiple transportation options, 10474 is what used to be called a “two-fare zone”, similar to many places in Brooklyn and Queens that are far from train stations.

Anthony Lopez, a sales agent with 212 Realty who handles a lot of properties in the Hunts Point-Longwood area said that even though the local market has picked up, the rate of bank owned homes will continue to remain high in Hunts Point because of its distant location.

Ironically many of these inconvenient areas with higher rates of foreclosure are the same neighborhoods that have been pockets of poverty  for decades.  Hunts Point in the South Bronx, Bushwick in Northern Brooklyn and Jamaica in Southeast Queens all have foreclosure rates around 20 percent.

These neighborhoods are located in general areas that suffered from urban blight in the 1960 and 70’s. After years of abandonment, the last decade saw a building boom of overvalued houses on the massive swaths of available vacant land. Now these are many of the houses that are in foreclosure. 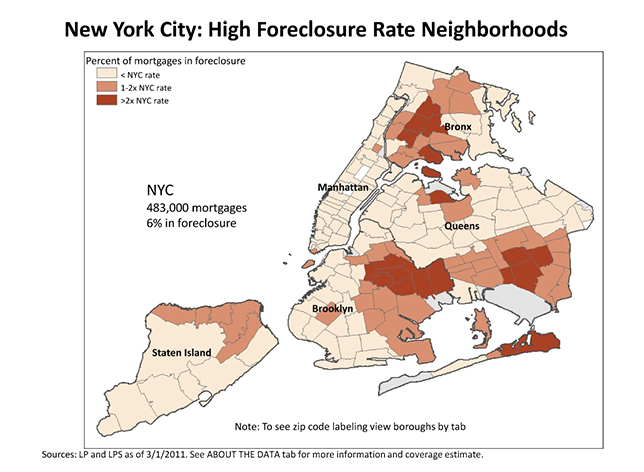 Collectively, these areas give the city a lot of foreclosed inventory keeping prices down. But many of these bank owned properties are also in bad shape , making them harder to move off the market.

“What a lot of these former owners do to the foreclosures is that they beat them up,” says Jamie Cornwall an agent at Miralex Mortgage in Rosedale, New York.

“When I bring a customer to look at it, it’s a problem for me. They want to know why the property is so messed up and I can’t make a deal.”

Mr., Cornwell said that even for clients looking to purchase foreclosures, credit is still hard to come by. This he said keeps distressed properties in an endless cycle of circulation in hard hit areas.

For those homeowners who are more than 90 days delinquent the lack of available credit makes a short sale nearly impossible.

“We have two clients that have being doing short sales for 2 years” Mr. Cornwall said. “They have a whole bunch of different homes but the buyers can’t get anything to go through. So they are stuck.”

This is despite that rates for fixed 30-year mortgages are at an all time low.

In general the amount of residential mortgages in foreclosure have risen 3 percent since 2009. 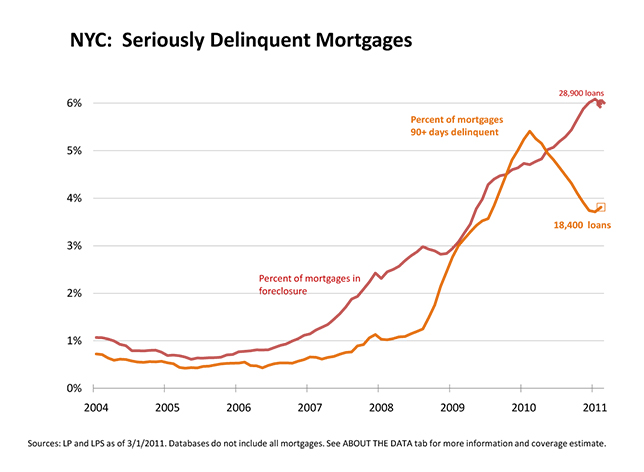 However help for some of these foreclosures is still available. The Federal Reserve announced that The Borrower Outreach Program started in November of 2011 is extending its deadline to April 30 of this year.

“We view this the submission by borrowers of requests for review as critical to ensuring that borrowers who suffered financial injury are identified and compensated for financial injury they suffered.“  said Suzanne G. Killian, Senior Associate Director, Division of Consumer and Community Affairs for the Federal Reserve.

“Additionally, servicers have conducted an advertising campaign to make borrowers aware of the opportunity to request reviews of their foreclosures as part of the Foreclosure Review” she said

In addition President Obama struck a deal last month with some of the nations largest banks to make available $26 million in order for troubled homeowners to refinance.

This should offer over time take at least some pre-foreclosed inventory off the market.

But no matter how successful any mortgage program may be in New York City, it doesn’t address the problems people like Mr. Samuel have with selling their properties anywhere near what they paid for them.

According to Victor Gutierrez, an independent buyers broker and appraiser price suppression in the outer boroughs is being manipulated by agents looking to buy short sales themselves for profits.

“It’s people in the industry who are trying to keep the prices low.” he says. “They have it appraised lower. What should have been sold at $250k is selling for $170-$180k. Then they get to mark up the price, make a profit and get the commission.”