Economist and former Federal Reserve chairman Paul A. Volcker spoke about the dangers of excessive spending and the necessity to revamp America’s political system at The Cooper Union in Manhattan on Wednesday, March 21. He delivered the 11th Annual Benjamin Menschel Distinguished Lecture at The Cooper Union. 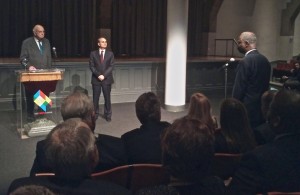 But attendees were disappointed if they had come to learn about how the Fed, the nation’s central bank that dictates monetary policy, operates or the specifics of the Volcker Rule, a section of the Dodd–Frank Wall Street Reform and Consumer Protection Act. The former chairman spoke mostly about the inefficiency of government and the need for spending, tax and political reform—popular ideas that elicited approving nods.

The Dodd-Frank Act is a set of broad-based laws that were passed to restructure America’s financial sector after the economic crisis. The Volcker Rule is scheduled to take effect July 21 and seeks to ban proprietary trading by banks. Proprietary trading is trading done by a firm for its own profit, rather than a customer’s. Banks like Lehman Brothers and Merrill Lynch have participated in the practice, which often involves a lot of risk.

There has been progress in the meantime, Volcker acknowledged, as positive employment news and improved credit have proven.

“Progress is promising but definitely incomplete,” he said. “The economy cannot be sustained by relying on more consumption.” Capital spending—spending on future benefits like education and research—is below peak levels, while payments to entitlement programs like Medicare and Social Security grew to nearly half of the federal budget in 2011 and are predicted to keep growing.

Volcker described the U.S. government as “creaky and contentious”, causing its citizens to wait in times of need. He also noted that the country is very dependent on foreign loans and has amassed the highest peacetime deficits in history.

“This is not characteristic of a country willing to prolong its leadership,” he said.

Volcker’s speech was prudent and cautionary. But it was a shame he did not spend much time on proprietary trading, the target of the Volcker Rule, or dispel any great myths about the nearly century old Fed.