Generations X and Y are doing better than their Baby Boom counterparts when it comes to saving for retirement.

401k balances among young workers are increasing at a faster rate than for Baby Boomers, according to a study by the Employee Benefit Research Institute.  Workers aged 25-34 who have been working and saving for as long as they’ve been in the workforce grew their 401k balances by 30.5 percent over the last year, whereas Baby Boomers of the same vein grew their accounts by only 23.7 percent. 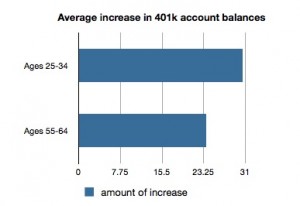 This is largely because Baby Boomers tend to shift their portfolios into safer investments as they approach retirement age.  If they take chances on risky investments and calamity strikes, older investors could be stuck working more years than they planned or simply run out of money.  Young savers, on the other hand, have time to recover.

Kevin Bourke works in finance and was born in 1964, placing him at the tail end of the Baby Boomer generation.  He has been saving for retirement since his first daughter was born, when he was 30.

“In a nutshell, I’d say that Baby Boomers are scared, and with good reason,” Bourke said.  “Many of us have worked and saved  our entire lives, doing everything we were told we should do, and yet  since 2000 our investments have gone  exactly nowhere.”

Much of the advice given to investors is age based. A rule of thumb cited by many financial advisors is that an investor’s equity portion should be 100 minus his or her age.  If you’re 80, you would place 20 percent in equities by that formula.

Even by this breakdown, relying entirely on a 401k can seem too uncertain for some savers on the cusp of retirement.  Many soon-to-be retirees took a hit when the recession began in 2008 and the value of their investments plummeted.  The burst of the housing bubble didn’t help much either, as many invested in property thinking it was a safe place to put their money.

“I’d be the first to admit that the market debacle took the wind out of a lot people’s sails,” said Michael Masiello, a financial advisor who works primarily with clients who are over the age of 55.  “The people who got hurt the most are the ones who had too much debt and houses they couldn’t possibly afford.”

As a result, Baby Boomers are in the unenviable position of having to choose between secure savings accounts with low interest rates and investments that are hard to trust after the recent meltdown.

Generations X and Y, by contrast, are more comfortable with and confident in 401k plans.  They take greater leaps of faith in terms of their investments.  Besides having time to recover if their choices go wrong, many young savers trust 401k plans because they have been familiar with them since they hit the workforce.  Participation is made easy by automatic enrollment.  In the past, workers had to notify their employer if they wanted in, but now they must speak up if they want to opt out.

Scott Harris, 35, is an editor at McGraw Hill who has most of his retirement savings in a 401k through his employer.

“I was fortunate enough to get a job pretty much right out of college and the whole time I’ve been taking advantage of 401k plans,” Harris said.

At present, Baby Boomers are participating in 401k plans less than their Generation X and Y counterparts.  But their involvement is on the increase, albeit a slower one than among their younger counterparts.

Bill McNulty, a marketing representative with IRA Marketing, LLC., believes this growth is more meaningful than it may seem on the surface.

“These people have more in these plans, so while the participation might be only a little bit more than younger people, they are still a very important part of the financial picture,” McNulty said.