Overall retail sales improved 1.1 percent in February, following an upwardly revised 0.6 percent gain the prior month, said the Commerce Department on Tuesday. Core retail sales, which exclude autos, rose by a strong 0.9 percent. Consumers contributed to broad based gains throughout all categories, including auto and clothing sales. The one exception was furniture sales, which fell 1.2 percent.

Gasoline stations also experienced a 3.3 percent gain over the previous month. This had a lot to do with increasing gas prices and warmer than usual February weather. Unseasonably high temperatures pulled people out of their homes earlier than usual, causing them to drive and shop more.

Increased consumer spending and a four-year low in jobless claims point to healthy, albeit slow, economic growth. And it has so far prompted consumers to continue to buy gasoline and not cut back too much on more discretionary items like clothing and cars—often a concern in the face of rising gas prices.

“People will complain of gasoline prices but you wont see any serious alteration of their spending habits,” said Russell Price, senior economist at Ameriprise Financial Inc. This is true for as long as job growth continues at its current pace and consumer confidence remains upbeat. 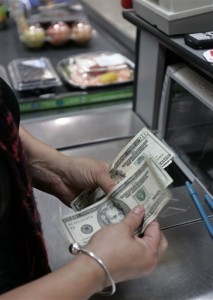 A Costco cashier counts money from a customer at Costco in Mountain View, Calif., Thursday, May 8, 2008. (AP Photo/Paul Sakuma)

And rising gas prices do not necessarily forecast a recession. The cost of gas normally picks up in the spring and summer when its demand increases, as consumers take advantage of pleasant weather.

“If things hold steady as they are, there should be increases due to regular seasonality,” said Chris Christopher, an analyst specializing in retail sales at IHS Global Insight. Prices will begin to decline in September as temperatures cool.

A skirmish between Iran and Western nations is still up in the air but any aggression from either side could further drive up the value of oil, from which gasoline is made.

That said, February’s retail sales were very strong despite concern at the pumps. Same store sales topped those reported last year, according to the Thompson Reuters Same Store Sales Index. Upscale and discount clothing retailers alike posted surprising gains, with teen sports apparel store Zumiez leading the bunch in this overall upward trend. Even Gap, which was expected to post a loss, instead reported its healthiest growth since April 2011.

So, while expensive fuel certainly has the potential to harm the retail sector as it has in the past, it is much more likely that consumers will withstand higher gasoline prices—as long as job growth and consumer mood continue to keep pace.