Despite widespread pessimism concerning a modest rise in January retail sales, the figures were not as disappointing as some skeptics made them out to be.

Overall retail sales rose by 0.4 percent in January, half the forecast, marking the fourth consecutive month of slow growth, the Commerce Department said Thursday. It was the inverse of December’s report—sales of cars and auto parts fell dramatically, while sales of food, gasoline and department store items surged.

The value of all sales, excluding autos, jumped 0.7 percent—higher than the 0.5 percent economists predicted. Consumers sought out things they needed but were more conservative in spending on electronics, which saw only a 0.5 percent gain over December’s abysmal 3.9 percent tumble. Electronics sales fell victim to the report’s only year-over-year fall of 0.6 percent.

The outlier that spurred discontent was the plunge in auto sales, which fell by 1.1 percent in January from 2.5 percent in December. The surprise came after automakers released reports of positive January retail sales, likely because high fleet sales—sales to businesses like rental car companies and to municipalities like police departments—are not counted in the government’s calculations.

“These artificially overstated fleet sales mean that actual consumers did not go out and buy any cars,” said John Herrmann, president of Herrmann Forecasting.

Despite not meeting expectations, the auto figures are not that bad. December auto sales increased 2.5 percent over November’s sales, cushioning January’s unexpected fall. Year-over-year sales showed a 7.3 percent improvement, not to mention that every business bar consumer electronics saw growth over the last year.

“It’s the consumer that’s pulling us through the recovery,” said Peter Morici, professor at the University of Maryland Smith School of Business. 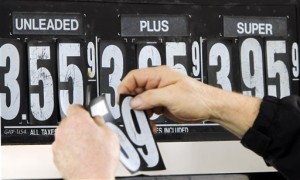 Gas station manager Fred Oliver, of Lisbon Falls, Maine, changes the price of gasoline on the pumps at a station in Topsham, Maine, on Tuesday, Feb. 7, 2012. (AP Photo/Pat Wellenbach)

Consumers even shelled out at the gas pumps in spite of rising gasoline prices, which reached a national average of $3.44 per gallon by month-end and are predicted to keep rising. Gasoline stations experienced a year-over-year growth in sales of 7.4 percent. Gas prices were 34 cents higher in the last week of January compared to the previous year, an 11 percent increase.

One worry among economists is the rising possibility of passing the 4 dollar-per-gallon mark by Memorial Day. “If we do, that will adversely impact retail sales in the second quarter,” said Herrmann.

This is a painful reminder of the same time last year when an improving economy was suddenly offset by unrest in the Middle East, causing oil and gas prices to soar and syphoning money out of American’s wallets that would otherwise have been spent on consumer goods. Worries about dipping back into a recession seemed very real at the time and that concern could return if there is a confrontation with Iran.

What this could mean for the rest of the year is uncertain. Jobless claims dropped by 13,000 to 348,000 in the week ended Feb. 11, a four-year low, said the Department of Labor on Thursday. This, coinciding with rising wages and a three-year low in the rate of unemployment, suggests a stronger recovery ahead.

At this point, the acceleration of job and income growth is crucial to avoid a repeat of last spring—and recent reports indicate that positive development is underway.